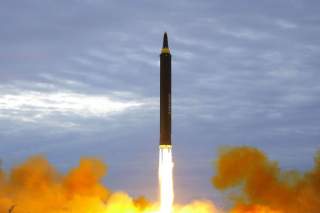 A week ago in this space, I argued that North Korea might not be aware of just how unique its current negotiating opportunity is. The American president – Donald Trump – and South Korean President – Moon Jae-In – are more dovish on North Korea than any of their predecessors. And that their two dovish presidencies overlap is genuinely unique: North Korea will likely not see an alignment like this for many years to come. I suggested it is, therefore, puzzling that the North has so brusquely ignored Moon, nor made Trump any kind of serious offer. This Northern response is fuel for hawks to argue, post-Trump and Moon, that North Korea is not serious about negotiations and can only be confronted.

Regrettably, the North does not seem to read the Moon-Trump alignment as a unique, dovish window of opportunity. Rather, it has declared a self-imposed year-end deadline. If U.S.-North Korean relations have not improved much by the end of 2019, the North is threatening some manner of retaliation. The North is characteristically vague about this. There is much debate about both whether the North will hold to this deadline – the North has used such timelines as a negotiating tactic in the past – and what Northern retaliation might be.

The most obvious breach would be a long-range missile test. There is a shaky gentleman’s agreement between Trump and North Korean leader Kim Jong-Un that the North will not test long-range rockets during negotiations with the Americans. Kim has danced around limits of this informal ban all year, with various short-range tests that threaten Japan. These were likely to pressure Trump via Tokyo without actually breaking the informal long-range ban. Trump, anxious to maintain at least the appearance of progress, has not called out these shorter tests.

Were Kim to pop off a long-range test in January though, that would be read almost everywhere as an open breakdown of talks. Even Trump, a master of media projection, would have a hard time defending it. A return to ‘fire and fury’ would not necessarily flow from that, but American expert and public opinion would likely swing back toward the default U.S. position that North Korea is an opponent. Trump has protested that Kim is his friend and that they have a relationship. This has bought Trump some time – maybe Trump with his outsider ways can pull off something none of his predecessors could? But Trump is still basically alone in the U.S. foreign policy community in his enthusiasm for Kim. If Trump fails to meaningfully change Kim’s behavior – and a long-range test would be a bright-line failure – then a snap-back to the traditional U.S. posture – containment and deterrence - toward North Korea is likely.

Trump, however, like any U.S. president, has a full plate. He simply cannot devote his entire presidency to this issue, as North Korea seems to expect of South Korean presidents (and as Moon has done). Worse, Trump is being impeached. His attention and that of his highest officials is elsewhere and will be at least through North Korea’s deadline. Further, Trump can claim, with good justification, that he Kim give a decent shot at a deal – three unprecedented summits – and Kim squandered them with unrealistic demands. Major U.S. movement before the end of the year is unlikely.

If left to the North Koreans and Americans then, the peace process will probably slowly come apart. The deadline will pass with little fanfare and sometime in late January or February, after some more North Korean bluster, the North will stage a provocation. So Moon’s enthusiasm for a deal may be the last serious chance for a breakthrough.

Moon’s commitment to a peace deal with North Korea is well-known. As mentioned, he has allowed his presidency to be all but taken over by engagement with North Korea. Moon has worked on this issue for twenty years and has taken real risks in his presidency to strike a deal with Pyongyang. He has deeply divided South Korea in his effort to find a breakthrough. Conservatives at home accuse Moon of being a North Korean spy and jeopardizing Seoul’s relations with Washington and Tokyo to appease the North.

Moon too may shortly lose political space. South Korean legislative elections occur next April. Moon’s approval rating hovers around 40%. The South Korean right loathes him for his North Korea outreach and claim, correctly, that he has little to show for it.

Hence, now is the time for one final push from Moon to break the stalemate. This push cannot simply be concessions or another summit. Opponents will damn those moves as appeasement and photo-op diplomacy. Moon needs to craft a creative swap between the North, and the US and South Korea – a deal which re-engages Trump’s interest at a busy time for him and finally pulls a concession out of the North which is meaningful enough to silence the growing chorus of conservative criticism in Seoul and Washington, yet simultaneously offers North Korea enough to halt its countdown.

It is unclear if Moon – or anyone – can thread such a narrow needle. North Korean elites may operate in such a bubble that they do not understand that Moon and Trump cannot offer as much as Pyongyang demands. But we are approaching the final moments when a deal might be struck: North Korea’s deadline is approaching; Trump is facing imminent re-election and impeachment; Moon is facing legislative elections. The time window for a serious deal is closing.