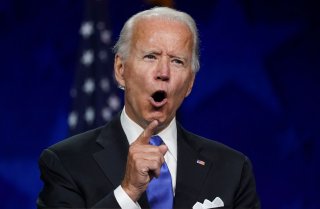 Vice President Biden has not yet unveiled what his comprehensive North Korea policy would look like if he gets elected in November, but one can gain a few clear insights from his broader foreign policy vision and comments from the campaign trail. While a Biden administration is likely to continue implementing an expansive high-pressure sanctions regime to drive the North Koreans to the negotiating table, the character of Washington’s diplomacy with Pyongyang, Seoul, and Tokyo will look very different.

Biden has clearly stated he would not hold any summits with Kim Jong-un until negotiations first yield preconditions that would make such a meeting more than a media spectacle. Biden isn’t rejecting summitry simply to draw a distinction between his and President Trump’s approaches, but because summits do not work and most likely run counter to U.S. interests by legitimizing Kim’s dictatorship.

Though his repudiation of summits indicates that Biden would instead substantially empower working-level negotiators, that path presents its own set of serious challenges. In previous rounds of negotiations, Pyongyang’s bureaucrats have purposefully dragged out proceedings with no intention of reaching an agreement simply to buy time—and may not even have the authority necessary to make decisions in the first place. Despite these major hurdles, the Biden team seems to trust that working-level negotiations still have far more potential to be worthwhile.

The most consequential shift that a Biden administration would likely bring to U.S. North Korea policy lies in Washington’s relations with Seoul and Tokyo. Biden has consistently acknowledged the importance of working closely with U.S. allies to address the North Korea threat as a unified front. Such a strategy would require that prioritizing a meaningful reconciliation between Japan and South Korea be among his administration’s top priorities.

Washington’s erratic approach to Pyongyang, including lobbing cavalier personal threats at Kim Jong-un in 2017-2018 and failing to consult allies during negotiations has directly contributed to the recent near-catastrophic breakdown of Japan-South Korean relations. An obvious seam in a disorganized U.S. Northeast Asian alliance structure reinforces Pyongyang’s position of leverage and ability to act with relative impunity. A Biden administration cannot undo decades of historical, territorial, and trade disputes between Japan and South Korea, but Washington has a responsibility to play the largest role possible in facilitating rapprochement between two of its most important allies.

Biden’s administration would not be the first to work with regional allies to implement a sanctions regime with the aim of inducing negotiations with Pyongyang. However, North Korea’s increased credibility as a nuclear threat and relevance to U.S. strategic competition with China will place it as a higher foreign policy priority than ever before. And despite the decades of impasse, experts continue to develop creative new ideas for how Washington can proceed based on the current scenario.

Still, even a flawless North Korea policy is not guaranteed to engender meaningful change on the peninsula. Further deterioration of Japan-South Korean relations and the coronavirus pandemic are both looming impediments to success, but the biggest hurdle will be Pyongyang’s desire to negotiate at all. Kim Jong-un and his predecessors have repeatedly proven their cruel capacity to resist both carrots and sticks at the expense of millions of North Korean lives and incalculable human suffering. Whether or not Joe Biden’s attempt to make a historical breakthrough with North Korea as President is ultimately successful, Americans can count on him not to squander his opportunity.