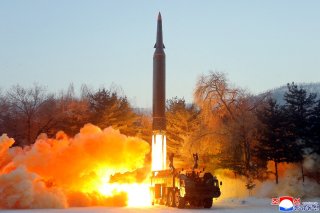 In a speech on New Year's Day, Kim said that the military would strengthen its defensive capabilities due to an increasingly unstable military environment on the Korean peninsula.

This was the second such weapons test in the past two months and has been seen as an indication that North Korea is pushing ahead to modernize its nuclear and missile arsenals, and could be a sign that the nation won't likely return to disarmament talks.

According to reports from KCNA the hypersonic missile gliding warhead "precisely hit" a set target some 700 km (434 miles) away.

"The successive successes in the test launches in the hypersonic missile sector have strategic significance in that they hasten a task for modernizing strategic armed force of the state," the KCNA dispatch stated.

The launch was detected by the Japanese coast guard early Wednesday, before being confirmed by South Korean defense authorities. The test has drawn criticism from the governments of the United States, South Korea, and Japan.

"We take any new capability seriously, and as we've said, we condemn (North Korea's) continued testing of ballistic missiles, which are destabilizing to the region and to the international community," a spokesperson for the U.S. State Department told reporters.

Hypersonic weapons have been seen as a potential game-changer for any military that can develop the technology, as the missiles could reach speeds in excess of Mach 5, or five times the speed of sound—about 6,200 km per hour (3,850 mph). However, speed is not the most significant feature of a hypersonic weapon—it is that the platforms, which can fly towards targets are far lower altitudes, are also designed to be highly maneuverable in flight, which makes countering them all the more difficult.

In addition, a hypersonic missile's speed and force are so significant that it can inflict damage by its sheer ‘kinetic’ impact without even needing explosives.

It could seem that North Korea has more than a single hypersonic weapon in development. Ankit Panda, a defense expert from the Carnegie Endowment for International Peace, told the Reuters news agency on Thursday that the recently-launched missile is not the exact same hypersonic missile, the Hwasong-8, which was tested last September, yet it shares a few similar features. The new missile, which hasn't been identified by name, was reportedly first debuted during a defense exhibition in Pyongyang in October 2021.

If the reports from KCNA are to be believed, and Wednesday's test was successful, it is likely we'll be hearing a lot more about it in the weeks and months to come.