North Korea Has a Pig Shortage Thanks to African Swine Fever: Report 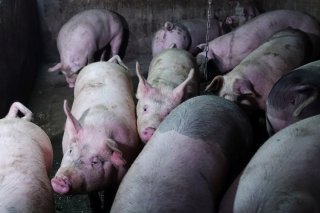 According to Daily NK, African Swine Fever (ASF) has become so widespread in North Korea that it’s now impossible to find piglets at local markets. The disease tends to spread quickly among the pigs at farms.

“You can’t buy a pig even at a premium in the markets nowadays,” a source in South Pyongan Province told the publication this week. “The swine flu has made it so there are fewer sows to breed piglets.”

The source also said that despite the scarcity of pork, prices of pork in North Korea have been decreasing, due to falling incomes caused by coronavirus restrictions. A report this week found that household spending in North Korea decreased in the first nine months of 2020.

The report on pig farms noted that the disease has been striking collective farms throughout the country, killing seventy-seven of the ninety-nine pigs at one farm in Chagang Province; the remaining pigs were culled. Veterinary quarantine officials and investigators have reportedly been sent to the affected areas.

The website of the Merck Veterinary Manual describes African Swine Fever as “a highly infectious and severe hemorrhagic disease of pigs that produces a wide range of clinical signs and lesions that can closely resemble those of classical swine fever.” There was a major outbreak of the disease in 2007, which “spread from Africa to Georgia and has since spread to many countries across Northern and Eastern Europe, Russia, and Asia.” The disease, however, does not affect humans.

The current outbreak isn’t only in North Korea, either-the outbreak has also reportedly also been reported in South Korea, including farms in Gangwon Province, which is near the border with North Korea.

Reuters reported this week that eighty cases of ASF have been found in wild boars in Germany since early September, including nine recent ones. This led China, in September, to ban imports of German pork, which had an effect on the price of pork in those two countries.

In addition, per Xinhua, similar ASF outbreaks have also been reported in the Philippines, in twenty-five of the eighty-one provinces.

“We are continuously restarting the hog industry, especially in the affected provinces. Our help focuses on the small and backyard hog raisers,” that country’s Agriculture Secretary told the agency. “This is a big project that we are doing to help those affected. We give them livelihood opportunities and projects.”