North Korea Cutting Back on Consumption Due to Coronavirus? New Report Says Yes. 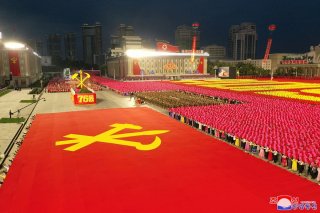 As coronavirus safety measures increase in North Korea, some households in that country have begun cutting back on their consumption, according to a new report.

There is a caveat, however, that the data is based on a rather small sample size, of just ten households in a single city, the city of Hyesan, Yanggang Province.

NK Daily is a publication based in South Korea, which reports on the goings-on in North Korea.

“Trade was stopped soon as the virus spread and the market has also been contracting ever since smugglers stopped their operations,” NK Daily’s source said. “The majority of people have responded to these circumstances by reducing their spending.” This also applies to what’s known as the donju, which is North Korean’s entrepreneurial class.

The report added that strict measures undertaken by the country to combat the spread of the virus have made it more difficult for businesses to spread their goods which, per NK Daily, “impacted the business activities of ordinary people, the source noted.” It’s also expected that the progress of making kimchi, a North Korean food staple in the winter months, is likely to be affected this year, due in part to the lack of importing of Chinese cabbage.

Another report, also from NK Daily, earlier this week stated that the opening of school in North Korea has been delayed until November, due in part to the participation by many students in Party Foundation Day festivities on October 10. The delay means that North Korean students are unlikely to have a winter break this year.

The festivities held that day, which marked the 75th anniversary of the North Korean regime, included a demonstration of numerous new weapons, including a massive new ICBM, although there has yet to be a test of the new missile that was demonstrated there. The parade has been interpreted as a way of posturing ahead of a possible new administration in Washington. Kim Jong-un had promised months back to show a new "strategic weapon".

Meanwhile, per NBC News, the showing off of that new missile led to an “emergency meeting” of South Korea’s government.

A report this week from Human Rights Watch assailed what it described as the cruelty and torture in the pretrial detention system in North Korea.

Image: People take part in a procession to commemorate the 75th anniversary of the founding of the ruling Workers' Party of Korea (WPK), in Pyongyang, North Korea in this image released by North Korea's Central News Agency on October 10, 2020.