North Korea Just Tested a New Missile. Here's What U.S. Diplomats Had to Say About It. 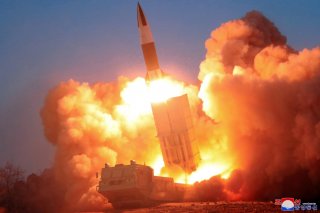 On Saturday and Sunday, the Democratic People's Republic of North Korea (DPRK)’s state media announced that the regime had successfully carried out a cruise missile test.

"The development of the long-range cruise missile, a strategic weapon of great significance.... has been pushed forward according to the scientific and reliable weapon system development process for the past two years," the Korean Central News Agency said Sunday, per the Yonhap News Service. "Detailed tests of missile parts, scores of engine ground thrust tests, various flight tests, control and guidance tests, warhead power tests, etc. were conducted with success.”

The U.S. reacted to the missile launch, meanwhile, by continuing to push the idea of diplomacy.

"So you know our position has not changed when it comes to North Korea," Karine Jean-Pierre, principal deputy spokeswoman for the White House, said Monday, per Yonhap.

"We remain prepared to engage and (sit) with the DPRK toward our objective of complete denuclearization of the Korean Peninsula.”

The U.S. Indo-Pacific Command, which has North Korea as part of its portfolio, also reacted to the launch.

"This activity highlights DPRK's continuing focus on developing its military program and the threats that poses to its neighbors and the international community," the command said in a statement. "The U.S. commitment to the defense of the Republic of Korea and Japan remains ironclad.”

"We are aware of these reports and I'm not in a position to confirm the reports with any great specificity at this time," Department of Defense spokesman John Kirby told the press Monday. "But again, I would just say it just highlights again the threat that the DPRK continues to pose to the region and to its neighbors.”

Also on Monday, per Reuters, the top U.S. envoy to North Korea met with counterparts in South Korea and Japan, to discuss the North Korean nuclear issue.

"The United States has no hostile intent towards the DPRK," the U.S. envoy for North Korea, Sung Kim, said at the top of the talks, Reuters said. “We hope that the DPRK will respond positively to our multiple offers to meet without preconditions.”