Is North Korea Loaded with Lots of Gold? 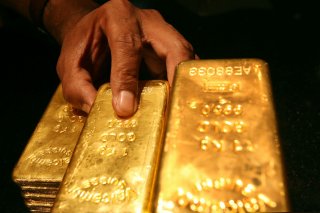 Last November, it was reported that North Korea’s government had arrested six people in connection with an unusual plot: to smuggle gold from North Korea over the border into China.

According to Radio Free Asia, the arrests were the cause of a twenty-day lockdown in the border region of Hyesan. Those responsible for the smuggling were reportedly soldiers, and at least one of them fled into China and is believed to be in the custody of Chinese authorities.

The North Korean soldier, per the report, admitted that he and others had been working with six residents and that it was at least their fifth trip smuggling gold.

“The six residents who handed over large amounts of gold to China on the borderline in Hyesan earlier this month were all arrested by the provincial security department by the afternoon of the 16th,” RFA’s Korean Service quoted an official as saying.

“Four of the six arrested residents are women in their early to mid-40s, and two are men in their early 50s. During the investigation they confessed that they had handed over dozens of kilograms of gold bars to China on five occasions since September with the help of a bribed security officer from the border guard stationed in Hyesan,” the report said.

As for the gold itself, per RFA, the smugglers were caught selling 20 kilograms (705 ounces) in gold bars.

Some may be wondering: who knew North Korea had so much gold?

Per Statistics Korea, “gold deposits in the country are estimated to be about two thousand tons, which is more than forty times the amount present in South Korea.”

A Quartz report back in 2017 looked at the vast mineral reserves in North Korea.

Another RFA report, last August, said that North Korea, amid the pandemic, had diverted scarce electricity to gold production facilities. The move was said to be taking advantage of high gold prices.

“The central Party ordered the priority supply of electricity to gold production facilities under Office 39,” an official who requested anonymity told RFA.

“The gold production plant under the Kumgang department in North Pyongan province, where I work, has been supplied with electricity for more than 12 hours per day all this year,” the official continued.

United Nations sanctions passed in 2016, however, forbid North Korea from legally exporting gold. The UN, however, concluded the following year that North Korea was flouting such sanctions, including that the country “also uses bulk cash and gold to entirely circumvent the formal financial sector.”

North Korea's Most Dangerous Weapon (Hint: It's Not Nuclear)