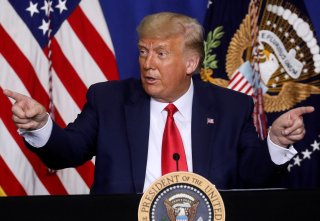 The conventions have mercifully ended. The real campaign is about to begin. And the contest could be close.

Perhaps the most striking absence from President Donald Trump’s acceptance speech was any mention of North Korea. He previously touted the issue as a great success. Indeed, the president believes that he saved the world from a nuclear holocaust in fall 2017. Actually, the only reason war threatened was because he adopted a recklessly aggressive stance toward the North. Certainly, Kim Jong-un had no interest in starting a conflict.

More seriously, President Trump regularly highlighted his summits, which opened a relationship with the Democratic People’s Republic of Korea for the first time in seventy-two years. That was a genuine accomplishment, but no denuclearization agreement resulted. That is hardly surprising.

Unfortunately, the president received almost no political support for his efforts. Democrats, who had been hyperventilating about the impending nuclear war, flipped and denounced him for selling out to Kim. Few had any interest in doing what was right, encouraging the president to make peace. Democrats simply sought to score political points, irrespective of the cost to America.

Republicans were even worse. Most appeared to be ideologically committed to endless war—everywhere. Many were more interested in following Saudi and Israeli demands regarding Iran than in advancing American interests. GOP legislators were horrified by proposals to leave Afghanistan even after nearly two decades of nation-building. Led by the war-happy John McCain and Lindsey Graham, Republicans pushed to intervene in the tragic Syrian civil war, which was irrelevant to American national interests. This informal war lobby’s only disappointment with Libya was that the United States stopped being involved in the ongoing civil war.

As for North Korea, Republican legislators, analysts, and pundits reacted with near unanimity in horror to the president’s diplomatic initiative. Graham was honest and openly welcomed the prospect of conflict. He dismissed concerns over nuclear war, since it would be “over there” rather than “over here.” If a few million South Koreans died, it apparently would not have concerned him.

Indeed, the GOP leadership—politicians and activists—has degenerated dramatically in recent years. The party has been captured by reflexive hawks without historical knowledge or intellectual curiosity, who want America to rule the world and believe that Washington can simply threaten its way to control. The American people are lucky that the Iraq debacle is the worst failure in the last twenty years. A nuclear war with North Korea could have yielded millions of casualties across several nations, including America.

The bigger problem was the president himself, of course. He didn’t take the process of diplomacy seriously. He could hold a summit. But he couldn’t make a complex agreement. And no personal connection, however genuine—most international relationships are politically convenient, not personally meaningful—can overcome radically different conceptions of national interest.

Kim Jong-un would have been a fool to agree to denuclearization under any circumstance, but especially in the way the president wanted which would have been instantly and completely. The latter seemed to expect a handshake and hug, followed by a drive to a warehouse holding the North Korean arsenal, to be loaded onto Air Force One. After which the two governments would live happily ever after.

Apparently it never occurred to Trump that filling his administration with warhawks, such as John Bolton, who had advocated bombing the North, might further discourage Kim from abandoning his costly deterrence for nothing other than a presidential promise to be nice. And that trusting Trump would be nuts after Washington dropped the Iran Deal with Tehran, reinstated sanctions, and demanded that Tehran surrender its independent foreign policy. Pyongyang could easily suffer the same fate. Then, having abandoned its weapons, Pyongyang would be essentially helpless.

If he is reelected, the president could restart the process. But that would require him to take a walk on the practical side. First, he would need staffers who backed his policies and put them into operation. He could “promote” Secretary of State Mike Pompeo to be his Iran war chief—a fitting choice if the administration’s aggressive confrontational tactics continue—and choose someone with a genuine interest in diplomacy and peaceful outcomes as his new secretary of state.

Second, the president should act as the dealmaker he claims to be and indicate his willingness to conclude agreements big and small so long as they reduce tensions, moderate threats, or reduce armaments. The ultimate objective would remain denuclearization, but he would seek to achieve that by meeting any number of other intermediate goals.

Third, he should press Kim to join in assembling a serious negotiating team to put together disarmament initiatives and sanctions suspensions. Reach an agreement and hold another summit. But, the president should insist, South Korean President Moon Jae-in should be involved. Including the latter would benefit the North—Seoul wants to promote economic development, along with other ties—and the United States, which would gain from passing off responsibility for dealing with Pyongyang.

If he wins, the president should address the North immediately after the votes are counted. Although second terms are typically disappointments, in the short-term, at least, he likely would face little resistance on Capitol Hill. Democrats would be devastated, likely poised for fratricidal conflict over who to blame for another Trump victory. Some likely would make their peace with him. Republicans who spent the last four years genuflecting whenever he turned their way would be even more submissive after his reelection. The sooner he could bring any agreement requiring legislative action to Congress, the better.

Anyone hoping for peace on the Korean peninsula probably should hope for this outcome. Predicting the course of a Biden administration is no easy task. The Obama administration simply abandoned any serious effort to address the North. Joe Biden said he would be willing to meet with Kim but with conditions. Given the fact that the Democratic nominee has surrounded himself with the usual Democratic suspects, who differ little from neoconservatives in their propensity for war, North Korean denuclearization would be highly unlikely. In terms of dealing with Pyongyang, anyway, better the demented devil we know than the aged perennial politician who shifted left under pressure and offered no fresh new ideas.

Donald Trump’s failure to apply his usual hyperbolic superlatives to his North Korea policy highlighted his lost diplomatic opportunity. The president took the first step but failed to make any serious effort by developing a serious proposal, which was necessary to go any further. November 3rd will show us whether he has another opportunity to notch up what could be a serious foreign policy achievement.