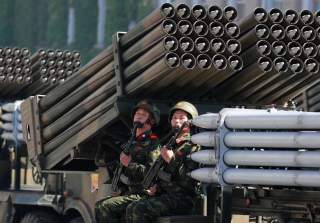 My prediction for 2020: The near-certain impeachment of U.S. President Donald Trump and a newly-emboldened North Korea testing long-range missiles and nuclear weapons will create a national security crisis the likes of which the world has never seen.

That’s a statement I can only hope ends up being wrong. But if trendlines in impeachment-obsessed Washington continue and combine with failing North Korea nuclear negotiations, that is our likely geopolitical fate.

Of course, all predictions have certain facts that serve as a foundation. When it comes to impeachment and a trial in the U.S. Senate that will determine President Trump’s fate, that seems highly likely. As for North Korea, trouble is brewing. The collapse of recent working-level negotiations last weekend ended in just a few short hours even though those talks took months to arrange. To make matters worse, both sides unable to even agree on what took place.  Now, Pyongyang is threatening to void its pledge to pause long-range missile and nuclear tests if there is no progress—at least as they define it—over a deal that grants sanctions relief for a first step towards their denuclearization by the end of the year.

But any prediction, of course, is laced with some assumptions, and for me, I assume that the timing and sequence of events in Washington and on the Korean Peninsula will not be kind. Let us assume that the U.S. House of Representatives drafts and approves Articles of Impeachment by say mid-January with a U.S. Senate trial beginning a week or so later. North Korea has pledged by the new year to choose a “new path” if no deal is struck with the U.S. That new path, by all the evidence we have so far, points to intermediate and long-range missile tests—the sorts of weapons platforms that President Trump constantly points to as a diplomatic victory and feels he deserves credit in halting.

All of this can only mean one thing: we could very well see President Trump’s impeachment trial begin as North Korea, sensing that America has been pulled inward, feels it can test long-range missiles and nukes with little to no repercussions. Pyongyang could then begin to ramp up tests to test Washington. Trump, at least so far, has said very little on recent missile tests—and nothing when Pyongyang upped the ante and tested a medium-range submarine-launched missile. North Korea may bet he will be as focused on events back home as he seems to be now, and interpret this as a green light to move ahead.

But, of course, this is President Trump we are talking about, and trying to make predictions on how he may or may not respond to anything seems like an impossible task. There is, however, some recent history that could help us determine his potential reaction. We know that Trump, at least in the past, has taken a tougher approach to North Korea when under political pressure back home. During the Hanoi summit last February, Trump obsessed over the coverage of his personal attorney, Michael Cohen, testifying to Congress. Trump then walked away from a potential deal from North Korea, even when Pyongyang showed wiggle room to negotiate. In fact, Trump would eventually admit on Twitter, and later to the press, that the Cohen hearing impacted his thinking. After all, Trump surely did not want to show weakness or risk being criticized back home for any deal that showed compromise.

With his back against the wall in a battle that will determine his political future, Trump may very well decide that a return to his “fire and fury” tactics might be the only way to show strength at home as well as abroad. I could easily see Trump going on to Twitter and resuming his game of nuclear chicken with North Korean leader Kim Jong-un. Trump could call Kim “rocket man” once again and make veiled threats that a possible military solution—with “all options on the table” or a “bloody nose strike”—were all again being considered.

How Kim will respond is easy to deduce, as we know North Korea throughout its history only matches pressure with more pressure. If Kim felt he was stood up like he was during talks in Hanoi, and if he wanted to project strength, he could decide to do the ultimate weapons test: an atmospheric nuclear detonation. Such a test would prove to the world that his nuclear deterrent is real, viable and can kill millions in minutes. In fact, Kim threatened this back at the end of 2017 when tensions were at the highest point. If Kim ever orders such as test at that point all bets will be off and armed conflict would be a possibility.

I can only hope that cooler heads prevail or that a combination of timing, circumstances, or a diplomatic breakthrough can prevent such an outcome. Otherwise the geopolitical equivalent of dumping gasoline on a pile of dynamite is coming. And we might not escape this crisis unscathed like in 2017.

Harry J. Kazianis serves as Senior Director at the Center for the National Interest, a bipartisan think-tank founded by President Richard Nixon based in Washington, D.C. You can find him on Twitter: @Grecianformula.