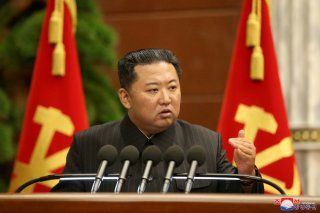 North Korea, in recent months, has been suffering from notable food shortages and hunger to the point where the famously secretive regime has even acknowledged the troubles.

The shortages have been attributed to coronavirus restrictions, the direct effects of the pandemic, and the continuing sanctions on North Korea.

Now, according to a new report from Radio Free Asia, the regime has authorized a radical solution to the problem of crop theft: shooting the thieves.

“Authorities have deployed military units to guard farmland during harvest season with orders to shoot crop thieves on sight,” the report said. It added that the regime set unrealistically high goals for agricultural production earlier this year, which have not been met.

“The Ninth Corps have organized groups to patrol the farms day and night because thefts are happening frequently,”  a source in the country told Radio Free Asia. “The General Staff Department ordered them to patrol the farms because… cooperative farm thefts are increasing all over the country…. If the authorities do nothing to prevent this, harvest yields will be greatly reduced.”

Patrol teams of about twenty soldiers each have been carrying out the searches.

“Any illegal trespasser is regarded as ‘an impure element’ against the government system and is to be shot without warning, so the order is causing tension among the residents living near the farms,” Radio Free Asia’s source said.

There has also been a campaign of “education sessions and propaganda” to discourage crop theft.

In addition to the crop thefts, there have also been medicine thefts in North Korea this summer, including the “dramatic theft” of a cache of penicillin from a government-owned warehouse. Penicillin, around the time of the theft, had doubled in price in North Korea, the report said.

“The military drug management office’s No. 4 warehouse here in Songchon county was burglarized, so the judicial authorities are on alert,” a source in South Pyongan told Radio Free Asia. “That warehouse stockpiles and stores various emergency medicines, including antibiotics set aside for civilians in the event of war.

“The thief who broke in cut the lock with some kind of tool and stole hundreds of doses of penicillin from the warehouse. This is the first time that wartime medicine has been stolen, so the military’s judicial authorities have been on high alert and are conducting an investigation, but there’s been no progress.”

The food and medicine shortages in North Korea have coincided with dramatic weight loss by North Korean leader Kim Jong-un. It’s not clear why and how Kim has lost weight, but North Korean experts say, if the weight loss is a healthy one, that’s a good sign for the strength of the leader’s position.