North Korea's Food Shortage Seems To Be Getting Worse 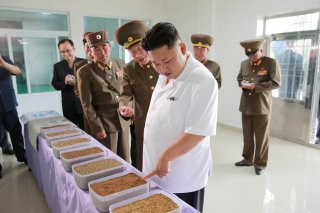 North Korea’s current food challenges are the result of a combination of both the international sanctions regime levied against the DPRK and its ongoing border closures in response to the coronavirus pandemic. In addition, a series of weather-related incidents—including both typhoons and flooding that resulted from a longer than average monsoon season—ravaged the country last summer, significantly impacting the North Korean agricultural sector by damaging both crops and irrigation systems. Additionally, the monsoon damaged supporting infrastructures such as roads and bridges.

The discrepancy between demand and North Korea’s total food production this year may be as much as 1.35 million tons, according to the Korea Development Institute, a state-run South Korean think tank. The Food and Agriculture Organization of the United Nations has estimated that even with imports, North Korea’s uncovered food gap could be as large as 860,000 tons, roughly equivalent to more than two months’ worth of food use.

North Korea’s food shortage has contributed to increases in the price of staple foods in the country, with prices for both rice and corn rising in recent weeks by as much as 22 percent. The country’s food challenges have even extended to some elements of North Korea’s more privileged ranks, with residents of Pyongyang having reportedly stopped receiving food rations sometime in April. Even well-off ethnic Chinese residents of North Korea—who are often able to leverage connections across the border to gain access to food and other goods—have also been struggling to secure adequate amounts of food.

In response to the growing food challenges, Kim, during a recent plenary meeting of the Workers’ Party of Korea Central Committee, signed a special order that included a mandate for the distribution of military stores or rice to local people. This distribution took some time to get underway but does not appear to be taking place.

Food supplies are not being distributed to the public free of charge, however. North Koreans are reportedly receiving vouchers with which they can purchase a week’s worth of food for below market value prices. This distribution of food has reportedly helped drive down the price of certain foods in at least some parts of the country. Unfortunately, the distribution of food appears unlikely to solve North Korea’s current food shortage. Even as the government-provided food supplies are being offered at significantly reduced prices, some North Koreans are reportedly struggling to afford even the low-cost supplies and may have resorted to selling their food vouchers instead.

To date, North Korea appears not to have reached the critical level of food insecurity and shortages that it did when it began to experience the deadly famine of the 1990s. Still, for a country whose food situation was already perilous even prior to the outbreak of the coronavirus pandemic, and whose response to that pandemic has complicated its ability to increase its food supply, it remains unclear how much longer North Korea can go before it gets to that point.