On North Korea, a Return to Fire and Fury Isn't Worth The Risks 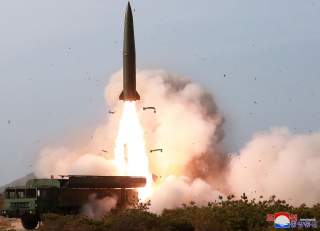 A couple of years ago the Trump administration seemingly brought the Korean Peninsula to the brink of war. The president matched North Korea’s Supreme Leader insult for insult, sent what he called the “armada” off of the North’s coast, and threatened “fire and fury.” The consequences of a conflict most likely would have been catastrophic, especially for America’s ally, the Republic of Korea.

Happily, negotiation rather than shooting occurred. Contra claims that Washington was played or fleeced, the North ended missile and nuclear testing and Kim Jong-un began acting like a normal statesman. Kim started meeting foreign leaders, and Pyongyang put its Yongbyon nuclear facility up for closure. Before the Hanoi summit, between Kim and Trump, Pyongyang reportedly had agreed to a peace declaration and opening of liaison offices. These steps toward normalization would have benefited America and the ROK as well as the Democratic People’s Republic of Korea. Moreover, Pyongyang agreed to further repatriation of the remains of Americans killed during the Korea War.

Still, the ultimate destination of the Kim-Trump “friendship” admittedly was uncertain. The president’s certitude that the latest in the Kim family line to rule the DPRK was prepared to fully disarm almost certainly was misplaced. Indeed, the behavior of President Trump and his predecessors made denuclearization an ever more distant possibility.

Internationally, nuclear weapons give the North status; militarily, nukes enhance Pyongyang’s destructive power; domestically, the program cements military loyalty to the regime. Moreover, possession of nuclear weapons offers the only sure deterrent against overwhelming American military power for a small, isolated, impoverished country with no sure friends. Only nuclear bombs and missiles redress a balance of power which has steadily shifted against North Korea since the Korean War ended.

The DPRK’s search for deterrence took on greater significance as the U.S. tagged Pyongyang as “evil,” attacked several nuclear-free regimes, and abandoned earlier foreign commitments (most the Iran Deal). Now add to that the president’s appointment of a national security adviser who advocated war against North Korea. Only a naive leader would disarm unilaterally, completely, and speedily as demanded by the Trump administration. And Kim, who brutally consolidated power after succeeding his father at age 28, is not naive.

Nevertheless, last year at the Singapore summit between Trump and Kim, Pyongyang offered a plausible road map. Kim wants to improve bilateral relations and create a regional peace regime; then denuclearization would follow. There is reason to doubt even then that the DPRK would ever yield all its nuclear weapons. However, complete verifiable irreversible denuclearization, while desirable, is not a prerequisite for American security. Washington has deterred far worse, most notably Joseph Stalin’s Soviet Union and Mao Zedong’s China, both equally radical but far more powerful states which possessed nuclear weapons. Moreover, North Korea’s objective is to deter, not attack, the United States.

More importantly, the North Koreans might be willing to take smaller steps which both could lead to denuclearization and are beneficial in their own right. For instance, formalizing the end of testing and capping their nuclear program. Pyongyang could also dismantle various nuclear facilities and allow in international inspectors. Furthermore, Kim could pull back conventional forces from their advanced positions and expand cooperative North-South activities.

Of course, the North’s newly cooperative stance should not be accepted on faith. Kim is no liberal reformer and he may view the process as a game. However, his objectives look more mainstream than those of his father and grandfather.

First, Kim appears serious about economic reform. Perhaps he simply recognizes that his nation will never be strong and resilient while perched on an economic precipice. South Korea’s economic success is a sharp rebuke for the DPRK’s collectivism, and China proves that a regime can retain political control while relaxing economic rules. However, economic transformation requires entry into the global marketplace, most notably for investment and trade.

Second, the North Korean strongman has gone from international recluse to statesman in just a year. And he appears to enjoy the process—certainly, he has shown a talent for summitry. Even South Korean diplomats were impressed by his behavior, such as showing age-appropriate deference to ROK President Moon Jae-in and acknowledging the North’s deficiencies.

Most importantly, Pyongyang has gone from a military target demonized around the world to a forgotten issue barely mentioned on newspaper back pages. Talk of armadas and war have disappeared in Washington. The most serious external threat to Kim’s rule is U.S. military action, but that is almost impossible absent a DPRK provocation.

If Kim’s new course is simply a short-term fake, the advantages would be ephemeral even in the best of circumstances. For instance, Washington could reimpose any sanctions that it lifted. China would be embarrassed and more inclined to cooperate with America if Pyongyang reneged on a deal. The North’s return to confrontation would also damage Moon’s credibility and push his government to adjust policy accordingly. For example, although Washington dismissed North Korea’s short-range missile test on Saturday, the first of any kind since November 2017, Seoul sharply remonstrated the Kim government. Summit invitations will arrive only so long as Kim plays responsible statesman.

However, Kim’s willingness to engage in meaningful arms control, whether or not doing so leads to full denuclearization, can only be tested by further negotiations. Unfortunately, Washington’s insistence that DPRK does what it cannot do—surrender all of its nuclear weapons immediately in hopes that the Trump administration will be nice to it—risks creating a permanent impasse. Unless the two leaders’ supposedly warm feelings for each other end up convincing them to accept a looser agenda, the same thoughts could turn into a shared sense of betrayal and a decision to recycle the dangerous tactics of 2017.

North Korea’s latest test was Pyongyang’s attempt to break the deadlock by a moderate dose of its time-honored tactic of brinkmanship. The missiles tested flew between forty-two and one-hundred-and-twenty-four miles. The U.S. homeland obviously is not within their range, but South Korea’s capital of Seoul is. President Trump dismissed the exercise and insisted that Kim “does not want to break his promise to me. Deal will happen!” However, it would be much more difficult for President Trump to exhibit such a mellow attitude if the DPRK tested intercontinental missiles and nuclear weapons.

In the meantime the relationship between the two Koreas, which is the one that most matters, has begun to fray. With bilateral economic cooperation largely blocked by sanctions, Pyongyang has dismissed the role of the South, including Moon’s proposal for another summit. Meanwhile, the South Korean president is taking increasing criticism at home over his nation’s slower economic growth. In addition, with peninsular détente Moon’s major accomplishment, souring ties with the North would put him under pressure to respond in kind.

Should North Korea’s relations with both the ROK and U.S. go in reverse, the situation could revert to that of late 2017—a confrontation suffused with insults, posturing, threats and increased possibilities of war. There would be no easy way back out.

Sanctions would continue to impoverish the North but would be unlikely to change its policy. America’s economic weapons have never forced a foreign government to yield on core interests. (Sanctions did, however, drive Japan toward war with the U.S. in 1941.) A half million or more North Koreans died of starvation in the late 1990s, with apparently little change in Pyongyang’s approach. Tougher sanctions today wouldn’t likely to yield a different result. Anyway, Washington likely would find international support for even tighter sanctions tough to come by since Washington would most likely be seen as the chief obstructionist to thawing relations with Pyongyang.

A war would be even worse. Despite to Senator Lindsey Graham’s belief that any conflict would be “over there,” Americans would be deeply involved. Seoul would be at great risk of destruction by conventional weapons. Assuming the North was able to hit regional targets with nuclear warheads, Seoul and Tokyo as well as American bases in Okinawa and Guam would be obvious targets. Casualty estimates are purely speculative, but some reach well into the millions.

All of this leaves leaves negotiation, backed by deterrence, as the only realistic option. But for negotiation to progress, the Trump administration must abandon its demand that the North does what it cannot do. The president should suggest that the two countries sign an agreement formalizing the understandings reached on liaison offices, a peace declaration and return of American personnel’s remains. Trump should also toss in the end of State Department’s travel ban both to and from North Korea. These steps would help fulfill Kim’s insistence on building trust.

Then negotiations should commence over nuclear issues. A president steeped in real estate deals should be comfortable with a transactional approach. What would a nuclear inventory be worth? What about closing down Yongbyon or sending in inspectors? Washington should put sanctions in play, with the understanding that a broken deal would result in them snapping back. But first, Trump could ease some restrictions on inter-Korean cooperation to start, enhancing Seoul’s credibility.

Washington must seek meaningful success over the coming year but impose no artificial deadline. Trump should treat every accomplishment as a step along the long and hard road to full denuclearization. It won’t take long to determine if Kim is serious. Is he really willing to hand over an inventory, shut down Yongbyon, or take other meaningful measures? Or does a year more of talking lead to no significant result? Whatever happens, America can adjust its policy accordingly.