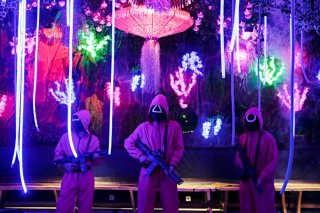 The rapid success of popular South Korean Netflix series “Squid Game” has caught the attention of state media in North Korea, who responded by publishing an article decrying the series on propaganda site Arirang Meari.

According to the article, the series offers a commentary on life in South Korea, revealing that it is “infested by the rules of survival of the fittest, corruption and immorality.”

The nine-part series depicts more than four hundred contestants, including a North Korean defector, playing a series of children’s games. The games’ eventual winners will receive a prize of 45 billion South Korean won, or roughly $40 million. The losers of each round, however, are executed.

Arirang Meari described this premise as a “brutal situation where humanity is destroyed,” suggesting it paralleled South Korean society.

The perception of North Koreans aside, “Squid Game” has emerged as a massive success around the world, quickly becoming Netflix’s most popular series. It was similarly successful in South Korea, although some commentary followed on the real societal problems that the show identified, such as the difficulty in escaping one’s personal debts.

As South Korea has emerged as a worldwide cultural hub, North Korea has regularly criticized its culture, describing it as shallow and decadent and comparing it unfavorably with the image it cultivates of itself as an egalitarian paradise—although that image bears little resemblance to reality.

Unusually, the South Korean black comedy film Parasite, which became the first non-English film to win the Academy Award for Best Picture, was reviewed favorably by some North Korean propaganda outlets. That film, depicting a poor family who unethically take up positions in a rich family’s household, was cited in the propaganda as accurately portraying unfair social dynamics within South Korea.

Other South Korean cultural exports are looked upon less favorably. K-pop music has been described by Supreme Leader Kim Jong-un as a “vicious cancer”, and was banned within the country, according to the official Korean Central News Agency. Similarly, the state-owned newspaper Rodong Sinmun warned young North Koreans that adopting fashions and slang from South Korea was “dangerous” and would not be permitted.

A law passed in December 2020 permits the fifteen-year imprisonment of anyone caught accessing South Korean entertainment, and allows the death penalty for those caught distributing it.