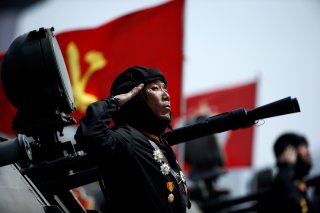 Less than a week after North Korea’s launch last week of ballistic missiles, the United Nations Security Council met Tuesday. But the body did not take any action as a result of the launches.

Per The Associated Press, the meeting was brief, and “all 15 members encouraged dialogue and negotiations on North Korea’s nuclear program but disagreed on the need for a statement.” The meeting followed a unanimous vote, the previous Friday, by the Security Council to “ renew the mandate of U.N. experts monitoring sanctions against the North.”

President Joe Biden, in addressing the launch last week at a White House press conference, stated that the actions of the North Koreans had violated existing U.N. resolutions on the firing of ballistic missiles.

North Korea is currently under multiple rounds of sanctions from the U.N. In 2017, the body put even more stringent sanctions in place, following a nuclear test by the North Koreans.

Russia and China, both members of the Security Council, reiterated their proposal from 2019 to lift some sanctions on North Korea, including on exports of textiles, seafood and statues, but that proposal has “languished.”

U.S. Secretary of State Tony Blinken specifically condemned the missile launches earlier this week, in a briefing that was held at the U.N. Security Council. Per the AP, Blinken had more to say.

“What we’re seeing from Pyongyang in terms of these provocations does nothing to shake the resolve of our three countries along with allies and partners around the world to approach North Korea from a position of strength in order to diminish the threat that it poses to the region and beyond,” the Secretary of State said.

The launch followed Blinken’s visit to the region the previous week, where Blinken and Defense Secretary Lloyd Austin met with their counterparts from South Korea and Japan and discussed the North Korea situation. At the same time, the U.S. and South Korea engaged in joint military exercises.

According to an analysis this week by the website 38 North, the missiles were likely KN-23 short-range ballistic missiles (SRBM), and the main reason for the launch was likely to test the new administration in Washington. Also, that analysis concluded that North Korea’s claims that the missile had a  2,500-kilogram warhead that it carried to a 600-kilometer range were likely embellished by the regime. And the missile launch was also likely meant as a retaliation for those military exercises by the U.S. and South Korea that took place the previous week.

The U.S. is continuing its review of policy related to North Korea.