North Korean State Media Released Video of an ICBM Launch—But Is It Real? 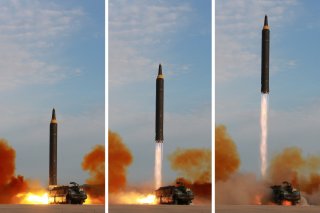 North Korean state media this week released a video of what appears to be the launch of an Intercontinental Ballistic Missile (ICBM), but there is reason to believe the video is fake.

According to Yonhap News Agency,  the footage was shown over the weekend during a concert for a workshop of military commanders. It appeared to show a Hwasong-15, taking off from a transporter erector launcher.

However, Yonhap quoted observers as stating that there's a good chance the footage was fabricated. That’s because North Korea has only test-fired the Hwasong-15 once, it was in 2017, and it wasn’t from a vehicle, but rather from the ground.

Yonhap also quoted “observers” as stating that it would be unlikely for the North Korean regime to conduct another such launch without anyone noticing.

“The Kim Jong Un regime launched the Hwasong-15 on Nov. 29, 2017. North Korea used a road-mobile launcher at the time to transport the missile to a launchpad. The footage released Friday, may have not shown the same weapon deployed in 2017, and if the Hwasong-15 was tested after 2017, it likely would have been detected in the South,” United Press International reported on the launch.

Back in March, the North Korean regime conducted a pair of tests of its missiles, including a test of its short-range ballistic missiles. It’s something the Kim regime has long done in order to test new presidents when they take over, both in the United States and South Korea. The 2017 ICBM test, in fact, came shortly after Donald Trump became president, first in July of that year. Trump later began a diplomatic process with North Korea that entailed a pair of meetings with Kim Jong-un, although the process never led to any type of final agreement.

“Let me say that number one, the UN resolution 1718 was violated by those particular missiles that were tested,” President Joseph Biden said after he was asked about the January launch. “We’re consulting with our allies and partners, and there will be responses if they choose to escalate. We will respond accordingly.”

“This activity highlights the threat that North Korea’s illicit weapons program poses to its neighbors and the international community,” U.S. Indo-Pacific Command spokesperson Capt. Mike Kafka said at the time.

Several countries, including Japan and South Korea, also condemned the missile launch back in March. The launches also closely followed the first visit to the region by Secretary of State Anthony Blinken and Secretary of Defense Lloyd Austin, while the United States and South Korea also conducted joint military exercises, which North Korea traditionally considers a provocation.