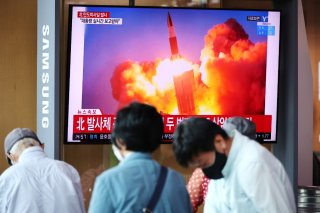 North Korea’s four missile tests in the first two weeks of 2022 have sparked fears of an arms race in Northeast Asia. Particularly concerning for security analysts and South Korean leaders was the firing of a hypersonic missile on January 12. The advanced missiles, which surpass speeds of Mach 5, may be able to evade radar and missile defense systems due to their high speed and ability to change direction in flight.

“While there’s some debate about the precise state of North Korea’s missile capabilities, including the new hypersonic missile it claims to have tested, what is clear is that North Korea’s continued advancement of its nuclear and missile programs are exacerbating the security dilemma in the region,” Patricia Kim, a fellow at the Brookings Institute, told the National Interest.

North Korean state media reported that the missile hit its target 621 miles from its launch site and executed “corkscrew maneuvering” during the final 150 miles of its flight path. The South Korean Joint Chiefs of Staff confirmed that the missile launch hit speeds of Mach 10 and was more successful than previous tests of the DPRK’s hypersonic missile technology.

The “maneuvering” and gliding are crucial factors in the ability of hypersonic missiles to evade missile defense systems. While traditional ballistic missiles also reach speeds upwards of Mach 5, they follow predictable parabolic paths. A ballistic missile with a hypersonic glide vehicle attached, which is reportedly what North Korea fired, follows a ballistic path in the early and middle stages of flight before the vehicle comes off. However, Vann H. Vaan Diepen, an analyst writing for 38North, questioned whether the vehicle attached to the DPRK’s missile was really a glide vehicle and not a less advanced maneuvering reentry vehicle (MaRV).

“Because diplomacy has failed thus far to restrain Pyongyang, Northeast Asian states, especially South Korea and Japan, feel as if they have no other choice but to increase their own military capabilities and joint capabilities with the United States to deter, or in the worst case, preempt, a North Korean attack,” Kim said. “Beijing, however, claims these moves shift the military balance in the region in a way that threatens its own security, and that it must continue to advance its own strategic capabilities in response. In sum, North Korea’s ever-advancing missile and nuclear programs are creating major ripple effects on the region.”

South Korean presidential candidate Yoon Seok-youl advocated for the country to strengthen its defenses following North Korea’s tests. “Peace is not achieved by way of slogans. Peace is a result of overwhelming power. A strong deterrent against North Korea alone can guarantee the ROK's peace,” he wrote in a statement on Facebook.

Yoon said that South Korea must develop the capacity for preemptive strikes, acquire its own hypersonic missiles, strengthen its missile defenses, and enhance the country’s retaliatory strike capabilities. He tied those capabilities to the “three-axis system,” a set of strategies and components that are being developed to counter a North Korean strike.

The three-pronged system, which aims to take out North Korea’s nuclear infrastructure and leadership before an attack can take place, was originally known as the “Kill Chain” and was renamed as the "strategic target strike” in 2019. Yoon said he would “restore and reinforce at an early date the ‘three-axis system,’” which he accused the Moon administration of undermining.

Democratic Party of Korea presidential candidate Lee Jae-myung accused Yoon of being ignorant of the system. "Kill Chain refers to a military strategy of striking a target when a weapon of mass destruction or a nuclear attack is obvious and imminent. It is not something that can be mentioned in such a situation like a test of a weapon or a projectile,” Lee said at a press conference on January 12.

Some of Yoon’s proposals are already being worked on by the South Korean military. In 2020, then-Defense Minister Jeong Kyeong-doo announced plans to develop hypersonic cruise missiles. Earlier in January, the Hankyoreh revealed more details about the hypersonic missile currently being developed by South Korea. The Hycore, an ultra-high-speed cruise missile, is more advanced than North Korea’s glide missiles and could be put through initial tests as early as this year. While hypersonic glide missiles can be detected by radar when they are high in their ballistic flight path, cruise missiles flying closer to the ground are much more difficult for radars to detect. In effect, a hypersonic cruise missile, such as those being developed by South Korea and Russia, combines the high speed of a ballistic missile with the precision maneuverability of a cruise missile.

Yoon’s hawkish attitude represents a major contrast with Lee, who supports continuing many of Moon’s diplomatic efforts with North Korea. In another statement posted to Facebook following North Korea’s recent threat to resume nuclear testing, Yoon said that “the Moon Jae-in government's ‘Korean Peninsula Peace Process’ is an utter failure. The North Korean regime over the past five years has shackled the hands and feet of the ROK government while advancing its own nuclear and missile capabilities.”

The Lee campaign, meanwhile, warned that Yoon’s “preemptive strike theory” threatens the peace and stability of South Korea. “A preemptive strike against North Korea on the battlefield on the Korean peninsula, where North and South Korea are facing each other, is an extremely dangerous scenario that is highly likely to expand in scope into an all-out war that will not be locally confined,” Choi Jieun, the Lee campaign’s spokesperson for international affairs, said at a briefing on January 11.

Lee even called Yoon a chicken hawk: “People who never served in the military are calling for annihilating and reunifying the North.”

Although the debate over defense policy and diplomacy has become fiercer and more frequent lately, some observers don’t think North Korea will be a significant factor in voters’ choices on March 9.

Jong Eun-lee, a research fellow at the North Korea Development Institute, told the National Interest that “the election impact is minor because of other issues, but it could shift [the] public debate toward a more hawkish stance on China and North Korea.” Jong added that if that happens, Lee’s more dovish stances would become less popular among the public.

John Lee, a columnist for NK News, largely agreed that the electoral impact will be limited. “South Korean voters don't care about North Korea, and we care about them less with each passing year,” he told the National Interest. “Not only have the North Koreans reached diminished marginal returns with their missiles … they've reached the point of negative outcomes. Unless the ROK-U.S. mutual defense treaty suddenly gets scrapped, no one in South Korea is staying awake at night because of North Korean missiles.”

As for Yoon’s reference to a “preemptive strike,” John Lee suggested it might be a ploy to shift the conversation away from various news stories about Yoon's wife and mother-in-law. He added that while South Korea's Far Right may support an aggressive stance toward North Korea, they are “a tiny minority.”