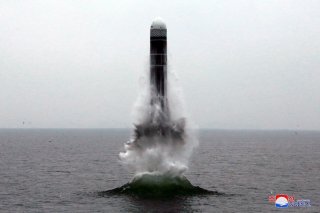 North Korea unveiled its latest submarine-launched ballistic missile (SLBM), the Pukguksong-4, at a military parade earlier this month. The National Interest recently discussed the new missile as a major potential boon to North Korea’s nuclear capabilities, but the Pukguksong-4 isn’t North Korea’s first foray into nuclear-capable, long-range SLBM’s. One of the most advanced displays of North Korean missile technology to date, the older Pukguksong-3 remains a potent addition to the DPRK’s otherwise bloated and unwieldy strategic arsenal.

Pyongyang’s state media first suggested in the summer of 2017 that North Korea’s military-industrial complex is working on a successor to the Pukguksong-1, a solid-fuel SLBM that drew heavy design inspiration from--and shared some common weaknesses with--the 1960’s liquid-fuel Soviet R-27 Zyb. The Pukguksong-3 was intended not as an iteration of this aging Soviet design, but as a fresh platform for a new generation of North Korean ballistic missile technology.

The missile was finally tested in October 2019, reaching a peak altitude of 950 km and traveling 450 km before landing within the maritime borders of Japan’s exclusive economic zone (EEZ). At roughly 2,000 km, The Pukguksong-3 doubles its predecessor’s maximum operating range; this means that it can strike not only South Korea, but the entirety of Japan, without leaving port. It can also threaten South Korean, Japanese, and US assets operating all across the Yellow Sea, East China Sea, and Sea of Japan. As highlighted by defense analyst Ankit Panda, this vast performance improvement is possibly driven by a new booster or a significantly lighter airframe.

As opposed to North Korea’s liquid-fueled land-based ICBM arsenal, the Pukguksong-3 is a solid-fuel missile. Whereas liquid-fuel systems can take as long as the better part of a day to be fully deployed, solid-fuel missiles can be fired at a moment’s notice. This not only translates into more reliable second-strike capabilities, but could potentially make a decisive difference in a preemptive strike scenario.

The 2019 test was likely conducted from a submersible barge, a typical way to minimize collateral damage in case of catastrophic malfunction. As with the newer Pukguksong-4, the Pukguksong-3 is designed to be fired from the North Korean Navy’s upcoming Sinpo-C (also known as ROMEO-Mod) line of diesel-electric ballistic missile submarines. Three Sinpo-C vessels are planned, but none seem to be in active military service as of the time of writing; widespread predictions of a celebratory Pukguksong-3 launch from a fully operational submarine at the October 10 parade were not borne out.

The Pukguksong-3’s biggest challenge lies not with the missile itself, but with its broader transportation and deployment system. North Korea will need at least three, but possibly up to five, Sinpo-C vessels to maintain the constant at-sea presence that’s required for an effective sea-based nuclear deterrent. Constructing all of these submarines poses a massive time and resource commitment that is sure to strain the DPRK’s relatively modest financial means.

The Pukguksong-3 marked a major milestone in North Korea’s ongoing efforts to acquire a survivable second-strike nuclear force, and remains one of the most sophisticated missiles in the DPRK’s strategic roster. It is not yet clear just how wide a technical gap there will be between the Pukguksong-3 and its Pukguksong-4 successor, but early design comparisons point toward an incremental update. With these two missiles, North Korea now has the SLBM’s for a survivable, second-strike maritime force; the only question left is whether or not it can field a sufficient number of modernized submarines to carry them.