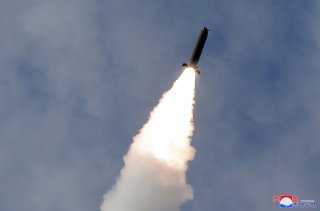 Many predicted that North Korea would go “ballistic” with missile launches last month to commemorate the founding of the (North) Korean Workers’ Party (KWP).

It didn’t happen then, but the situation isn’t likely to stay that way.

Adding to the interest, following a November briefing from the National Intelligence Service, a South Korean lawmaker said that North Korea is currently building two new submarines, both of which are likely capable of firing a Pukguksong SLBM.

The legislator, who sits on the National Assembly’s intelligence committee, said, “One of the submarines North Korea is building can carry a submarine-launched ballistic missile. One is a modified Romeo Class and the other is a new medium-large size one.”

Pyongyang has been reportedly building or modifying several diesel submarines to carry its new SLBMs, including the Gorae- (aka Sinpo-B), the Romeo- and a possible new construction Sinpo-C-class ballistic missile submarines.

Concurrently, North Korea has tested the Pukguksong-1 (KN-11) and Pukguksong-3 (KN-26) SLBM from a submerged barge or from a submarine; the latter missile reportedly has a range of nearly 2,000 kilometers, capable of reaching all of Japan and South Korea.

Clearly, the development of a ballistic missile submarine force has significant consequences.

The operational deployment of a fleet of modern, competently-commanded ballistic missile submarines would magnify the threat, credibility, flexibility, and survivability of North Korea’s current regional and ICBM nuclear arsenal.

Additionally, expanding Pyongyang’s nuclear force from a land-based nuclear monad to a land- and sea-based nuclear dyad could—over time and with increased submarine capabilities and SLBM missile ranges—threaten the U.S. homeland as well.

The advent of a North Korean nuclear dyad would also complicate U.S. and allied policymaking, strategic deterrence, and ongoing diplomatic efforts to negotiate and denuclearize the Korean Peninsula.

First, work in conjunction with its Japanese and ROK allies to bolster political and military deterrence in the Pacific and maintain the capacity to destroy the North Korean land- and sea-based nuclear threat;

Second, keep the door open to nuclear negotiations with Pyongyang, with a view to bringing enduring peace and security to the Korean Peninsula, while maintaining sanctions pressure until North Korea complies with U.N. resolutions and U.S. laws;

Fourth, with other concerned states, guard against the potential proliferation of North Korean submarine-launched ballistic missile and submarine technology, especially to Iran, which has an interest in both.

Regrettably, North Korea has made recognizable progress on its missiles and missile boats. While they aren’t yet operational, sailing the Sea of Japan or Yellow Sea, it should be assumed that research and development continues—even absent recent public tests.

It’s certainly a possibility that, following the U.S. presidential election, Pyongyang might decide to test the recently unveiled Pukguksong-4, sending a strong political signal to Washington, Seoul, and Tokyo.

Indeed, North Korea has historically conducted a strong provocation early in any new or returning U.S. administration to make sure that Pyongyang is given its desired place among foreign policy priorities.

Complicating matters is the stubborn fact that North Korea is a difficult intelligence target. Moreover, the North Korean navy isn’t currently the highest priority among the competing operational and analytical intelligence requirements in the Western Pacific.

As a result, North Korea’s submarine and submarine-launched ballistic missile programs may become operational sooner than the best U.S. and allied intelligence assessments expect—especially if Pyongyang gets outside assistance for these programs.

With this in mind—and taking into account current threats such as China’s military buildup—now is the time to think about and act on North Korea’s submarine and submarine-launched ballistic missile programs.

Considering the dogged progress of these North Korean strategic programs so far, they’re likely very much part of our and our allies’ national security future.

Dr. Peter Brookes is a Heritage Foundation senior fellow and a former deputy assistant secretary of defense. Audrey Pederson is a member of the think tank’s Young Leaders Program.