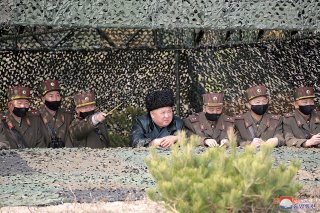 The sudden death of Kim Jong-un would set in motion a cascading series of events that could lead almost anywhere.

On the one hand, it could be business as usual in North Korea. The first two successions in the Kim Dynasty in 1994 and 2011 were smooth beyond expectations, partially because they were planned. A sudden one would be trickier, but as Daniel Pinkston has argued, there is a road map of sorts that points towards a power-sharing agreement between Choe Ryong Hae and Kim Yo-jong. The former providing the muscle and the latter providing the cash and the legitimacy as a direct heir of the Kim Dynasty.

On the other hand, fear, greed, or a desire to settle scores on the part of any number of individuals or constituencies could lead to miscalculations that plunge the country into political instability, civil war, and possibly intervention by both China and the United States. This is a remote possibility, but wars often appear unlikely just before they begin. In the proverbial historical mirror, events were often closer than they appeared.

Just how such a succession would play out is anyone’s guess, but we can be absolutely sure of this: the United States will be in a weaker position to manage a crisis on the Korean peninsula than at any point since it prematurely withdrew American forces from Korea in 1949.

Tensions with China—like it or not, a necessary participant in dealing with any crisis on the Korean Peninsula—have been dangerously high since the Trump Administration began its “not-so-easy-to-win” trade war with China in 2018. Previous administrations’ had acknowledged that China’s behavior in international markets harmed American interests and violated the spirit, if not the letter, of WTO regulations. In response American policymakers painstakingly spent years constructing the Trans-Pacific Partnership (TTP), bringing together 13 nations of the Pacific Rim into a model free trade area that would use multilateralism and consensus to ensure that equal competition and not Chinese brow-beating would characterize future trade in the Pacific. The TTP would have created an integrated market that was eight-times the size of China’s economy in terms of GDP. President Trump withdrew from the TTP during his first week in office, ceding economic leadership of the Pacific to China and alienating America’s allies in the process.

President Trump then further undermined the United States standing in the region by slapping tariffs on not just China, but also American allies South Korea and Japan. Equally damaging has been President Trump’s accusation that these countries are “free-riding'' on American security, which in South Korea reopens wounds stemming from the country’s division.

The US-Korean alliance is at its weakest point in decades. The refusal of South Korea to acquiesce to President Trump’s demand of a five-fold increase in a new cost-sharing agreement resulted in the furlough of more than 4,000 South Koreans employed by US-Forces Korea (USFK) on 1 April. USFK called this development “unthinkable” and indicated it will have a negative impact on its “fight tonight” posture. Considering that large scale US-Korean military exercises have been suspended by President Trump since June 2018, the alliance is ill-prepared for joint action.

And all this was before the Covid-19 pandemic, which the unhinged leadership of both China and the United States have spuriously blamed on each other. The pandemic has placed unprecedented stress on the global economy, caused the largest contraction in the Chinese economy since 1992, and proved that not even a national disaster on the scale of the Vietnam War can bridge the political divide in the United States.

We do not know what will happen on the Korean peninsula if Kim Jong-un should die suddenly, but we do know that the American response will be hampered by erratic executive leadership, intense political partisanship, a contracting economy, an antagonistic relationship with China, and a strained relationship with South Korea. For all these reasons, the United States is in its weakest position in decades to handle such a crisis.

David Fields is the author of Foreign Friends: Syngman Rhee, American Exceptionalism, and the Division of Korea and the editor of The Diary of Syngman Rhee, 1904–34, 1944,  published by the National Museum of Korean Contemporary History. Since 2015 he has been the book review editor of the Journal of American-East Asian Relations. He has been published in the Washington Post, North Korea Review, Journal of American-East Asian Relations, SinoNK.com, Transactions of the Royal Asiatic Society-Korea Branch and in the Working Papers Series of the Cold War International History Project. His research and analysis has been featured on National Public Radio, Wisconsin Public Radio, C-SPAN and CNN. Fields is currently the associate director of the Center for East Asian Studies at the University of Wisconsin–Madison​.