Only Korean Unification Can End the Korean War For Good 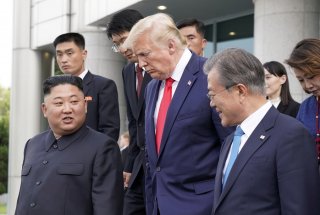 Ten years ago, my wife and I were looking into a wedding date and venue in Seoul. My mother-in-law informed us that June 25 was the only available date at her church. I said “great!” My wife followed with an emphatic “No!”

Like September 11 for many Americans, June 25 is an ominous date for Koreans, as it commemorates the start of the Korean War. Following months of border skirmishes between North and South Korea, on June 25, 1950, North Korean tanks traversed the 38th parallel launching a three-year war. The war brought an estimated 3 to 5 million deaths and the Korean Peninsula, particularly the northern half, lay in ruins. Historian Michael Seth notes that the United States dropped 635,000 tons of bombs on Korea, surpassing U.S. bombing in all of the Pacific theater during World War II. Hostilities ceased with the signing of the Armistice Agreement on July 27, 1953, but it did not formally end the war. Nor is it likely that the war will end anytime soon.

The Korean War is seared into the national psyche of the two Koreas. Although both Koreas have rebuilt and moved forward, albeit on vastly different scales, the scars, symbolized by the demilitarized zone dividing the two Koreas, still remain. Seventy years later, conflict persists between the two Koreas, even if not at the level of full-scale war. North Korea’s recent acts of belligerence towards South Korea, including its recent destruction of the Inter-Korean Liaison Office in Kaesong, underscore this point.

It was just two years ago that the end of the Korean War felt near. The Panmunjom Declaration adopted by Chairman Kim Jong-un and President Moon Jae-in on April 27, 2018, appeared to herald a new era of inter-Korean cooperation. Section 3 of the Declaration stated that “The two sides agreed to declare the end of war this year that marks the 65th anniversary of the Armistice Agreement.” Both Koreas stated their desire to replace the Armistice Agreement with a peace agreement and establish a permanent peace regime. As U.S.-North Korea diplomacy ramped up towards the June 2018 Singapore Summit, several policymakers, peace activists, and academics also pushed ending the Korean War onto the negotiating agenda. Proposals ranging from a non-binding end of war declaration to a formal peace treaty were advanced and scrutinized.

An end-of-war declaration may boost confidence-building and a peace treaty may officially end the Korean War, however, even if a peace treaty were to formally end the war by 2025, there could be no true end to the war without unification. A treaty could not guarantee the end of future conflict between the two Koreas without other peace mechanisms also being in place—this includes a process of denuclearization. Of course, an end-of-war declaration or peace treaty might serve as an intermediate if not necessary step to building a lasting peace regime and eventual unification.

One might argue that Korea was already divided prior to the start of the Korean War and that therefore the terms on which the Korean War ends need not account for unification. However, we must remember that the war itself was initiated to unify a divided Korea and rectify a situation conceived out of prior wars. North Korea struck first, but South Korea was also fully prepared to unify the country by force in 1950. For this reason, full and true closure to the Korean War cannot take place without unification—a task which at this moment seems unattainable by the 75th anniversary of the Korean War. Until then, June 25 will continue to be commemorated by Koreans as a day of national tragedy.

Postscript: My wife and I married on June 26, 2010, the day after the 60th anniversary of the Korean War.

Andrew Yeo is a Professor of Politics at The Catholic University of America. He is author of Asia's Regional Architecture: Alliances and Institutions in the Pacific Century and co-editor of North Korean Human Rights: Activists and Networks. You can follow him on Twitter @AndrewIYeo.