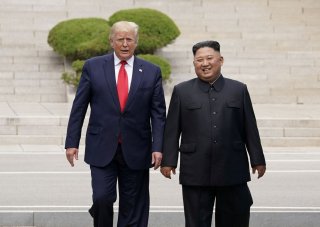 Undoubtedly, it is a complicated question, but to start off, the answer will be “very unlikely”—if not “simply no”—at best. In order for the Korean War to come to an end, a peace accord has to be signed, particularly between the United States and North Korea. Materializing this peace agreement, however, requires the harmony of several bilateral relations, which is indeed an extremely difficult task to achieve. Ultimately, U.S.-China relations have the most influence, while inter-Korean relations have the least influence. Moreover, the rigid nature of the Kim regime itself only makes formally concluding the war a more distant possibility.

The strategic rivalry between the United States and China has been escalating, and only a few will doubt this trend will continue. This rivalry means these two powers are highly unlikely to cooperate on the North Korea problem over time. In this regard, two points should be emphasized. The first point is that China has a tendency to view North Korea as more of a strategic asset, rather than a strategic liability. For instance, whenever China’s tension with the U.S. increases, Pyongyang becomes one of the cards that Beijing can potentially employ in its negotiations with Washington. Just as importantly, the second point is that the U.S.-China rivalry provides Pyongyang with fertile ground for maneuvering—i.e., playing Washington and Beijing against each other. We should remember that North Korea previously succeeded in maneuvering during the Sino-Soviet split.

In the realm of U.S.-North Korea relations, Washington maintains that a formal peace treaty should be negotiated only after North Korea’s denuclearization, but Pyongyang’s firm position is that it should come before the denuclearization process as part of a security guarantee. Therefore, unless at least one side decides to change its specific demand, which is highly unlikely for the foreseeable future, ending the Korean War will be almost impossible. Of course, the possibility of America and North Korea signing an end-of-war declaration—not necessarily the same thing as a peace treaty—before the war’s 75th anniversary still remains open. However, as this formal declaration most likely will acknowledge only the fact that the war has been effectively over for a long time, it will be nothing more or less than a step toward eventually working out and signing a peace treaty.

Another possibility is that the two Koreas may sign their own version of an end-of-war declaration before June 25, 2025. Although such a move would be important, because North Korea views the United States as a primary threat to its security, the Korean version of a formal declaration would only be symbolic. If the timing is right, it could serve as a catalyst for expediting an end-of-war declaration between Washington and Pyongyang.

Lastly, given the nature of the Kim regime, North Korea has to maintain its ability to manufacture crises whenever there is internal distress. When manufacturing crises, Pyongyang always needs external scapegoats, and the usual suspects are America and South Korea. If a peace accord gets signed, thereby formally ending the war, doing so will be no longer possible. North Korea knows this well.

In sum, it is very unlikely that the Korean War will come to an end before its 75th anniversary in 2025.

Yu Bin Kim is a Ph.D. student in Political Science at the University of Missouri with focuses on both interstate and intrastate conflicts. Follow him on Twitter at @Yubs89.