President Trump Probably Spoke with Kim Jong-un; If He Dies There Likely is a Succession Plan 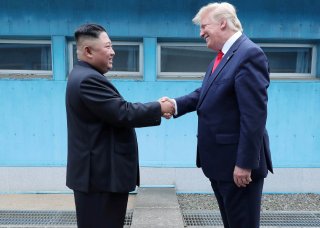 As someone who watched North Korea in a series of U.S. government national security jobs over twenty years, there is one thing I know about expert assessments of the inner workings of the Hermit Kingdom: they are constantly wrong. This is in part because North Korea is such an extremely closed and secretive country. But it also stems from the determination of North Korean officials to hide and deceive about activities within the country from outsiders. As a result, there is a long list of predictions by well-known experts of North Korean nuclear and missile tests that never occurred. There also have been many assessments of North Korean officials who disappeared and were presumed dead who later reappeared.

Since the North Korean regime knows it is being closely watched, especially by the United States, assessing developments within the country based on what Pyongyang chooses to make available can be hazardous to an expert’s reputation.

For these reasons, I have been skeptical of recent news reports that North Korean leader Kim Jong-un has died or is seriously ill. This could be the case since there is credible information that he may have health problems.  His father Kim Jong Il, who died at age seventy in 2011, reportedly suffered from obesity, heart disease, and diabetes. The elder Kim also was a heavy smoker and drinker.

Kim, reportedly thirty-six, is obviously obese. U.S. officials who met with him at the Vietnam and Singapore summits reported that he appeared winded after short walks and heard him wheezing. Kim also reportedly is a heavy smoker. These factors are consistent with reports that Kim underwent heart surgery last month, but they don’t confirm this report.

There also has been unfounded speculation that Kim may be suffering from the coronavirus. Given Kim’s physical condition, he probably would be at high risk of complications if he were to contract this disease. Despite the North Korean government’s claims that its country has zero cases of the virus—which former CIA analyst Jung H. Pak says is “a near impossibility”—there are rumors it has a large number of coronavirus cases. Moreover, it is possible that like Iran, North Korea’s leadership may have been hit hard by the virus.

I believe there is a strong possibility that Kim either has the virus or is in seclusion because he is afraid of catching it, possibly as he recovers from heart surgery.

I’ve discussed North Korea with President Donald Trump and I know how proud he is of his personal diplomacy with Kim Jong-un. I believe, based on recent cryptic statements about Kim’s status by Trump, that Trump has been in communication with the North Korean leader, either by phone or by exchanging letters. I also believe it is likely that the president offered to send U.S. doctors to North Korea if Kim was seriously ill.

North Korea has executed hundreds of people since Kim assumed power, including over 150 senior officers in the country's government, military and ruling Korean Worker’s Party. Kim also ordered the execution of his uncle Jang Song-thaek in 2013 and the assassination of his half-brother Kim Jong-nam in 2017 with the nerve agent VX.

These killings likely were not just to eliminate rivals who might try to depose Kim Jong-un but also anyone who might challenge the succession of the “Paektu” bloodline or attempt to succeed Kim over his chosen successor. Ensuring that a descendent of the country’s founder Kim Il-sung, “the Eternal President,” has long been a priority of the North Korean regime. It is hard to believe that there is not a firm plan in place to ensure that a family member chosen by Kim Jong-un succeeds him. Moreover, if it is true that Kim recently had heart surgery, I believe it is certain that a succession plan would have been carefully reviewed before the operation.

Some experts believe Kim’s sister, Kim Yo-jong, is his likely successor. Kim Yo-jong reportedly is her brother’s closest confidant and could be his second-in-command. A February 2020 National Interest report noted she had been groomed “for a high-ranking role within DPRK leadership since her time in college.” Kim Yo-jung is a secretarial assistant to her brother and an elected official of the Supreme People’s Assembly. She has played some prominent public roles over the last few years, including representing North Korea at the 2018 Pyeongchang Winter Olympics and accompanied her brother to summits with Trump in Singapore and Vietnam. Some experts believe reports that she and her brother flew to Singapore on separate planes reflected her senior position in the North Korean government and possibly that she has been designated as her brother’s heir.

Could Kim Yo-jong succeed Kim Jong-un? Only Kim’s inner circle knows. Some question whether North Korea’s Confucius values would allow a woman to head the state. Perhaps Kim Yo-jong would be named regent until one of her brother’s three young children—the oldest of which is believed to be ten—could take over as leader when he (or she) reached adulthood.

Would North Korean policies shift with Kim’s passing? I believe they would probably remain the same at least in the short term because Kim’s chosen successor—especially if it is Kim Yo-jong—was closely involved in his policymaking.

In summary, it is impossible for outside experts to accurately assess Kim Jong-un’s health situation. My guess is that he is alive and will resurface in a few weeks. If he were to die, then I believe Kim has a succession plan in place that will prevent a power struggle to succeed him and will continue his policies.

But this is all guesswork. As Trump has said, “we’ll see what happens.”

Fred Fleitz is president of the Center for Security Policy and a former deputy assistant to President Trump.  He is the author of the 2018 book The Coming North Korea Nuclear Nightmare: What Trump Must Do to Reverse Obama's “Strategic Patience.”