Question: What Is North Korea Like Behind the Headlines? 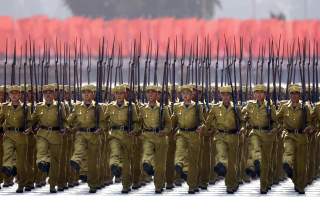 The Democratic People’s Republic of Korea long has been known as the “Hermit Kingdom.” That label originally applied to the isolationist monarchy which eventually was swallowed by Japan and turned into a colony. For decades North Korea similarly looked inward. Visiting the DPRK, as I did in 1992, was a rare experience.

The North is much more open today. When I returned two years ago I flew in sitting next to a Brit who was on his third tourist trip. He was planning a helicopter flight over the capital of Pyongyang, which would have been inconceivable only a few years ago.

However, the country remains mysterious, even inscrutable, to most American policymakers. Few have spoken with someone who knows North Korea. Fewer have visited or met a North Korean. Policy is effectively made in an information vacuum, where assumptions and presumptions dominate the discussion.

Equally important, Americans who do visit the DPRK—not many these days, given Washington’s ban on most travel there—typically stick to Pyongyang. That’s where important decisions are made. But the city is artificial even by North Korean standards. The countryside is rawer and poorer, and has changed much less than Pyongyang in recent years.

To help expose the Washington policy community to the North beyond Pyongyang Cato is holding a policy forum, “Peering Beyond the DMZ: Understanding North Korea behind the Headlines,” at noon on June 11.

Our speakers will be Heidi Linton, with Christian Friends of Korea, Daniel Jasper, with the American Friends Service Committee, and Randall Spadoni, with World Vision. All have visited the DPRK while working on humanitarian projects. As a result, they have encountered a country mostly unseen by policymakers. They will discuss their experiences working with North Koreans to address some of the desperate humanitarian problems facing the North.

Of course, the challenge posed by Pyongyang’s nuclear program would not disappear even if U.S. officials better understood the DPRK. However, America’s response should move beyond confrontation. Washington has discovered how difficult it is to force other governments to submit to American demands. Policymakers should look for other ways to influence other nations and peoples.

North Korea has evolved, in some ways significantly, since Kim Jong-un succeeded his father in 2011. More changes are likely. Watchful and wary engagement is more likely to encourage positive reform than unremitting hostility. That kind of engagement requires a far better understanding of the DPRK, both its system and people. Increasing that understanding is the objective of this forum.