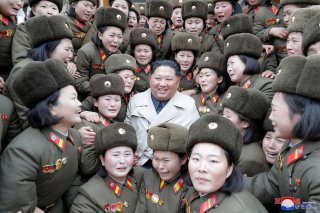 The Biden administration has been attempting to engage North Korea, so far without success. However, Supreme Leader Kim Jong-un has raised hopes by ordering restoration of the inter-Korea hotline, cut more than a year ago. Moreover, Kim’s sister, Kim Yo-jong, made a surprising pitch for contact—though with conditions, of course.

Nevertheless, Pyongyang still looks far from a breakthrough. Kim Jong-un continues to give Washington the cold shoulder. Indeed, he charged that the U.S. desire to talk was merely one of its “cunning ways” to disguise its “hostile policy” toward the Democratic People’s Republic of Korea.

Gone is the friendly tone of the infamous “love letters” between Kim and President Donald Trump. Recently, Kim to the Supreme People’s Assembly (SPA), Washington “is touting ‘diplomatic engagement’ and ‘dialogue without preconditions’ but it is no more than a petty trick for deceiving the international community and hiding its hostile acts and an extension of the hostile policy pursued by the successive U.S. administrations.” That doesn’t sound like an invitation for American officials to drop by for a friendly chat.

Indeed, the Pyongyang Times reported that his critique of U.S. policy was even more far-reaching. “Saying that there now exist not a few serious crises and challenges facing the world but the fundamental danger comes from the US and its vassal forces’ high-handed and arbitrary practices that destroy the foundation of international peace and stability, he noted that the current international situation is mainly characterized by the fact that it has got more complicated as the structure of the international relations has been reduced to the structure of ‘neo-Cold War’ due to the US unilateral and prejudiced bloc-forming style external policy,” the Pyongyang Times reported.

Kim did not have much good to say about the South, despite the shriveled olive branch extended by his sister. The Supreme Leader’s outreach obviously is an attempt to split Seoul from Washington, perhaps launched with the realization that South Korea’s election next March could yield a conservative administration even less inclined than the Untied States to make concessions.

The newspaper reported on his speech to the rubber-stamp SPA. “Kim Jong-un said we are closely watching the fact that recently, the US and south Korea are destroying the stability and balance around the Korean peninsula and inviting more complicated dangers of clash between the north and the south through excessive arms buildup and allied military activities that arouse concerns, underscoring the need to stand against the gangster logic of the US and south Korea, bitterly denounce it, firmly maintain our invariable standpoint to check such dangerous trend, and take all necessary tough measures,” according to the Pyongyang Times.

Thus, in the DPRK’s view, it is up to the Republic of Korea to make the first, second and third moves. The reason the South Korean lamb has yet to lie down with the North Korean lion is simple: the former’s relationship with America. Among the snippets of Kim’s talk reported by the Pyongyang Times.

·       “It is the invariable demand repeatedly explained by us to ensure the respect for each other and withdraw the partial view, unfair and double-dealing attitude and hostile viewpoint and policies towards the other side before declaring the termination of war.”

·       “It is important for the south Korean authorities to change its confrontational and habitual attitude toward our Republic, keep the stand of national independence through practices, not with words.”

Were the two Koreas not still technically in a state of war, then his remarks could be laughed off as a fine example of inflated agitprop. However, backing his comments are a spate of missile tests, including antiaircraft, cruise, and hypersonic. Although under extraordinary economic pressure from international sanctions and domestically-imposed isolation due to the coronavirus, the regime continues to develop new weapons.

Still, the South should proceed with diplomacy, which in turn should be backed by Washington. Kim Yo-jong offered Seoul a possible inter-Korean trifecta, holding a summit, reopening a liaison office, and signing a peace declaration. Although the DPRK’s initial asking price will be high, everything is negotiable and this looks like the only diplomatic game that is currently available. The Biden administration’s entry into talks with Pyongyang now looks most likely through the ROK.

South Korea should approach any negotiations from a position of strength. Seoul has what the North craves—a vibrant economy, global reputation, compelling culture, international strength, and commercial options. Despite the Kim dynasty’s talk of juche, it is North Korea that is desperately dependent on another nation—in this case China—for economic survival. In fact, it is most frustrated that sanctions have prevented it from moving forward on business projects with the South.

However, the Biden administration should give Seoul something to negotiate over, agreeing to sanctions relief necessary for the ROK to offer joint development projects—conditioned on better North Korean behavior. Failure to fulfill its commitments would leave the North where it was when the South shut down the Kaesong Industrial Complex in 2016, bereft of commercial benefits it was counting on to ease its economic plight.

While there might be little reason to be optimistic about this approach, there are no better options. Military action would make the regime’s need for a large nuclear arsenal even stronger, would not destroy the entire North Korean nuclear arsenal and infrastructure, and would trigger military retaliation, and likely full-scale war. As for sanctions, they so far have not broken the regime. Indeed, the administration recently acknowledged that international enforcement is inadequate to achieve desired results. Anyway, if the DPRK can survive coronavirus-induced isolation, it can survive even tougher sanctions.

The choices in dealing with the land of no good options keep getting worse. Kim Jong-un might just be playing hard to get, but the only diplomatic door that he has opened lately is for the South. The latter should go through, with eyes wide open and, equally important, U.S. support. There will be no solution without diplomacy. Unfortunately, there may be none even with diplomacy.