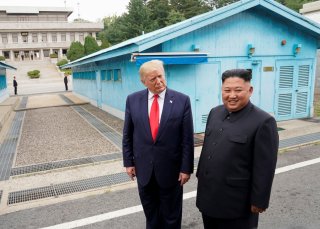 One of the more notable foreign policy episodes of Donald Trump's presidency was the diplomatic opening to North Korea. Trump had three meetings with North Korean leader Kim Jong-un between 2018 and 2019, including the “DMZ Summit” in June 2019 in which Trump became the first sitting U.S. president to set foot in North Korea.

No permanent agreement was signed, although Trump touted it during his reelection campaign in 2020, leading to a moment of contention during the presidential debates. Throughout, Trump talked about how Kim had written him a “beautiful letter.” And now the letters from that diplomatic process are a point of contention in Trump’s latest post-presidency controversy.

The Washington Post reported on Monday that when Trump left office, he “improperly removed multiple boxes from the White House,” which were then retrieved earlier this year from Trump’s Mar-a-Lago estate by the National Archives and Records Administration. The National Archives recovered the records because the items should have been preserved under the Presidential Records Act.

The items in question, according to the newspaper, included “correspondence with North Korean leader Kim Jong Un,” as well as the letter that was left in the White House by Trump’s predecessor, Barack Obama, in January 2017.

The boxes in question were handed over following discussions between the National Archives and Trump’s lawyers. The Post reported late last month about the Trump White House’s habits of ripping up official documents, some of which have had to be reassembled in order to comply with document requests from the January 6 Committee.

While every recent administration has committed some violations of the Presidential Records Act, the Post said that the Trump administration’s habits are considered the “most challenging” since the Nixon administration, whose efforts to avoid handing over records during the Watergate scandal went all the way to the Supreme Court.

And while other presidents have handed over documents after leaving office, the National Archives told the Post that “NARA has never had that kind of volume transfer after the fact like this.”

The story also noted that the government has little enforcement power when it comes to making sure important documents are handed over by presidents.

“You can’t prosecute for just tearing up papers,” Charles Tiefer, a law professor at the University of Baltimore, said of the recent situation involving Trump. “You would have to show him being highly selective and have evidence that he wanted to behave unlawfully… [with] willful and unlawful intent.”