Report: North Korea Is Cracking Down on Chinese Phones 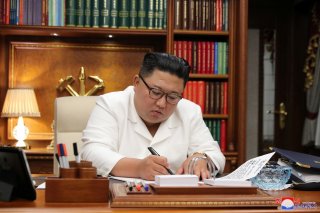 The Trump administration, in a move that appears to have since been abandoned, attempted earlier this year to ban TikTok, due to the company’s supposed ties to the Chinese government. The U.S. government has also taken steps against Huawei, another major Chinese tech firm.

Now, North Korea is pursuing its own moves against Chinese technology.

A new report says that the North Korean regime is cracking down against “Chinese-made mobile phones,” in order to prevent communication with the outside world. Mobile phone hardware imports have been illegal in North Korea since the United Nations imposed sanctions in 2017, in relation to North Korea’s weapons systems. The Washington Post reported in mid-2019 that Huawei had secretly helped build North Korea’s cellular network.

According to Daily NK, authorities from the regime recently held lectures, in North Korea’s China-adjacent Yanggang Province, “emphasizing that people who use Chinese-made mobile phones will face punishment.”

The publication’s source said that the lecture was given to the Socialist Women’s Union of Korea, letting the audience know that remittance brokers have recently been nabbed in cities on the border, and that “ the labor bureau of the provincial party committee” has been tasked with bringing the problem under control. The lecturer went on to advise that those hiding such devices should reveal themselves.

The lecturer also said that those “caught in the act talking on the phone with those in a foreign country” would be looking at “five years of correctional labor.”

While South Korea is a leading producer of mobile phones and other consumer electronics, North Korea has a relatively primitive cellular infrastructure and is said to run a network that’s the equivalent of a 3G network, which was what the standard was in the United States about a decade ago. However, the new Daily NK story said that cellular traffic in North Korea has frayed to the degree that most who own Chinese-made cell phones only check them about once a month.

Daily NK had run a similar story back in October, about how the Ministry of State Security officials operating in the border area had been telling residents “with foreign-made mobile phones to quickly turn them in given there’s a goal to completely eliminate them by the end of December.”

Reuters reported in the fall of 2019 that smuggling businesses related to mobile phones were thriving in North Korea, with six million North Koreans—about a quarter of the population—owning the devices. Those phones, some of which Reuters obtained, were made with a version of the Android operating system, Taiwanese semiconductors and Chinese-made batteries.

A new North Korean tablet computer, the Naenara 101, was introduced in North Korea earlier this fall.