The Reviews Are in for Sero, Samsung’s Rotating QLED TV 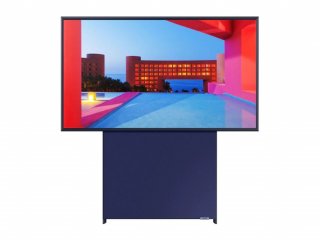 Amid its announcements at CES in January about the many TV products that would roll out throughout the year, Samsung unveiled a particularly unique one: The Sero TV, a 47-inch QLED TV that rotates, which had also been shown the previous fall at IFA 2019. The idea is that users can rotate the TV to watch things in portrait mode, such as Instagram and TikTok videos. The TV allows Galaxy users to mirror to the Sero TV’s screen.

RTINGS, in a review published Thursday, gave the Sero TV a mixed usage score of 7.0. It’s described as “a decent TV for most uses. It has good visibility in bright rooms, decent viewing angles, and it upscales lower resolution content like cable TV and videos from social media sites well. It has a fast response time and low input lag, making it a good option for gaming and use as a PC monitor.”

The TV’s listed provides include “good SDR peak brightness” and “decent viewing angles,” in addition to the rotation functionality, while the cons include a “mediocre contrast ratio” and “bad black uniformity.”

“It can’t deliver a satisfying HDR experience due to its low HDR peak brightness and lack of local dimming,” the review said.

A TechRadar review, published earlier this month, describes the Sero TV as “a rotating TV no-one asked for—though it has some neat tricks.”

Among the pros are its uniqueness, 60W speakers, and that “the screen rotates.” Cons are a lack of ethernet, input issues, and “worse for iOS.”

“Aimed at heavy social media users, this rotating TV is able to present both landscape and portrait content, meaning you can be watching Netflix one minute and scrolling through Twitter or TikTok the next. It isn’t perfect, but Samsung deserves credit for bringing it to market at all.”

A review in the British newspaper The Independent asked whether the Sero TV is the future of TV.

“Left in portrait setting, it looks strange in the living room, like the monolith in 2001: A Space Odyssey that sets the monkeys off,” the review said. “The problem for the Sero, which is not really its fault, is that there isn’t much to watch on it yet. Videos on Instagram and TikTok are fast and disposable, designed to be recorded and viewed on the go. The ones I sample in portrait don’t gain much from the big screen, and in fact it is a little disconcerting to see figures so large.”