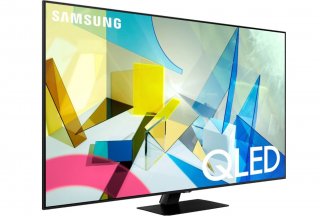 At CES back in January, Samsung introduced a highly unique TV-one that rotates and gives users the opportunity to watch content in portrait as well as landscape mode. This allowed users to, say, watch Instagram Stories or TikTok videos vertically on their TVs.

Now, that 47-inch TV, the Samsung Sero TV, is available in the U.S., at a listed retail price of $1,999.99. The TV, which like Samsung's other high-end TVs features a QLED panel, had already been available in Korea.

Among other features, the Sero TV allows users of Samsung Galaxy phones to mirror to the Sero TV's screen by tapping their phone against the screen's frame. It works with iPhones too, although doing so requires more steps.

Samsung makes TVs much bigger and more expensive, like the 99-inch QLED TV that costs $60,000. It also recently announced the Terrace, which is for watching TV outside; the Terrace, as well as the Sero, is part of the company's Lifestyle TV Line.

TV review sites got a look at the Sero TV back at CES.

"As a conceptual and cultural piece, the Samsung Sero TV is incredibly intriguing," TechRadar wrote about the Sero. "The ability to have a TV that rotates automatically to match the orientation of your content is something any TikTok-user will appreciate. That said, cinephiles may be more attracted to traditional QLED screens that focus a bit more on substance over style."

Drawbacks for the Sero TV, according to that site, included the lack of automatic rotation for iOS, and that it only comes in a single size.

"The rotating Samsung Sero flips to resemble your smart phone, targeting millennials and Gen Zers who prefer social video," Tom's Guide wrote. That site praised the rotating display, that it works with both Android and iPhone, and that it's "Ideal for watching social videos," but criticized its "underwhelming audio," and that it's not mountable on a wall.

"From a conceptual standpoint, the Sero speaks to the larger trend of traditional entertainment devices embracing the younger generations love of everything mobile," Tom's Guide said.