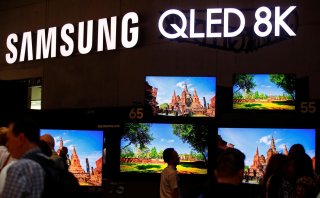 8K TV is one of the stranger product categories out there. It's the next generation of ultra-high-definition TVs, which have been rolled out at CES and other electronics shows since not long after 4K TVs were announced.

Several of the major TV manufacturers, including Sony, Samsung, and LG, have 8K TVs on the market at very high-end prices, with this year's 8K Sony TV, the Z8H, topping out at $10,000 for its 85-inch model.

However high-end 8K TVs may be, the fact about them remains that there's very little content available to watch on them. Cable and other pay TV providers don't provide streams in 8K, nor do streaming services, and there's not yet any type of physical media that broadcasts in that resolution. Movies aren't even being filmed in 8K yet, for the most part, although recent Marvel movies “Captain Marvel” and “Guardians of the Galaxy Vol. 2” used 8K cameras for some scenes.

"It's great in theory, but right now you'll have a hard time finding 8K content, and there isn't much point in getting a new TV if you don't have a way to really show it off," PC Magazine wrote in January, as the latest models were rolling out at CES. "The same was true when 4K emerged, and if 8K follows a similar trajectory, you'll likely be limited to demo footage and nature documentaries for a few years before you see any of your favorite movies or shows in the format.”

Therefore, the big selling point of 8K models is their upconverting capability. And it's important to note that while most broadcast and streaming content is available not in 4K but lower resolution such as 1080p, so the leap is even larger. Also, some experts say the difference between 4k and 8K is only visible when the screens are a certain size.

"To present lower-resolution material on an 8k TV, the TV has to perform a process called upscaling," RTINGS wrote. "This process increases the pixel count of a lower-resolution image, allowing a picture meant for a screen with fewer pixels to fit a screen with many more. It’s important to remember that since the amount of information in the signal doesn’t change, there won’t be more detail present."

4K.com, meanwhile, cautions against buying an 8K TV, because "the extra visual quality these TVs deliver is wasted along with the extra money you’d spend on them." The site adds that "for you to even really distinguish a visual difference between 4K resolution and 8K resolution, you need to start looking at TV screens of at least 75 inches or more, and serious appreciation of the difference between the two only really fleshes out at around the 85 inch plus mark."

If the path of 4K is any indication, prices for 8K TVs will come down as the years pass, making them much more of a value proposition than they are currently.

Stephen Silver, a technology writer for The National Interest, is a journalist, essayist, and film critic, is also a contributor to Philly Voice, Philadelphia Weekly, the Jewish Telegraphic Agency, Living Life Fearless, Backstage magazine, Broad Street Review and Splice Today. The co-founder of the Philadelphia Film Critics Circle, Stephen lives in suburban Philadelphia with his wife and two sons. Follow him on Twitter at @StephenSilver