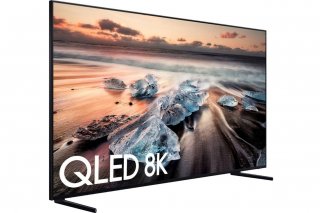 For all you other folks out there, Best Buy is offering a two-year financing option if you can swing $2,500 a month. The likely outcome is that most of you will politely pass on this “deal”—because, after a few moments of weighing the pros and cons, there really is no reason to spend that much cash on a TV.

For many, that kind of money could be used as a down payment on a home or a pretty amazing new vehicle. But for a TV? The better option would be to spend $2K or $3K on an OLED panel.

What the Q900 offers the consumer is wide color gamut, high light output and full-array local dimming. The new 8K Quantum processor and artificial intelligence both work to improve texture, smooth out jagged edges and reduce any blurring. The result is fantastic picture quality—but at $60K, one would surely expect that.

Other solid features include Samsung’s Bixby digital assistant for voice control, plenty of HDMI and USB inputs, Dolby Digital Plus and Real Game Enhancer, which helps prevent tearing and stuttering on your favorite graphic-intensive games.

There is, however, a purpose for Samsung to make these 98-inch beasts—they give us a glimpse into what’s in store for next-gen TVs. In the not-too-distant future, it’s highly probable that most content will be in 8K, and you will naturally need a pixel-heavy panel that can support that.

But for today and at least for several more years, you should definitely be fine with a 4K TV, as there is a dearth of 8K content available. Here in the U.S., the pickings are pretty slim when it comes to 8K content. YouTube has mostly nature documentaries or what you would see in the TV display section at your local Best Buy. Video-streaming site Vimeo recently added support for 8K, and it now supposedly has more than 6,000 videos tagged in that resolution.

Fans of 8K really would like to see more film content released, instead of only short nature clips and one-off international sporting events (Japan’s NHK was set to broadcast the now-postponed Summer Olympics in 8K). Interestingly, there have been several movies filmed in 8K, such as “Guardians of the Galaxy Vol. 2,” but this is far from becoming the standard in the film industry.

To combat the lack of 8K content, Samsung’s Q900 comes with AI upscaling technology that can theoretically transform 4K content into 8K—basically adding in the “missing” pixels. This is surely a fascinating advancement, but upscaling will never be a substitute for the real thing.