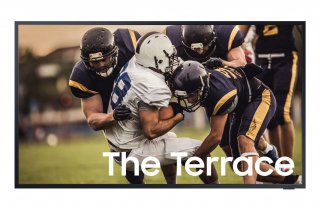 Samsung has announced the arrival of a new outdoor TV called The Terrace. The Terrace represents the company’s first-ever outdoor 4K QLED TV. The Terrace is available in 55-, and 65- and 75-inch sizes, and is pitched as an extension of the 2020 Lifestyle TV Line, which also includes the Serif, Frame and Sero models.

The Samsung Terrace joins other outdoor TVs for the consumer market, from such brands as SunBriteTV, Seura, and the UltraView line from Peerless-AV.

The company is aiming for those who are eager to get outside.

“In recent months, as we’ve spent more time at home, we’ve seen how the TV has played an even more essential role in our everyday lives,” James Fishler, senior vice president of Samsung Electronics America’s Home Entertainment Division, said in the announcement. “As the weather improves, consumers are looking to enjoy these experiences outdoors. The Terrace takes all of the Samsung Smart TV experiences that consumers have come to expect, and optimize them for the backyard.”

The announcement also touts its high motion rate of MR240, which it calls “perfect for sports fans,” assuming that live sports will return sometime soon.

Along with the Terrace, Samsung announced the arrival of an audio product, the Terrace Soundbar. Sporting Wi-Fi and Bluetooth connectivity, the soundbar can be mounted either to a wall or to the Terrace TV itself. Also rated IP55, the sounder also sports distortion cancelling technology which delivers quality sound outdoors. The Samsung Terrace will ship by the end of May, and is priced at $1,199.

The consumer model of The Terrace arrives in the U.S. and Canada Thursday, with other regions getting it later this year. A business version—presumably marketed to hotels, bars, and other businesses with a need for outdoor televisions—will arrive later this year.