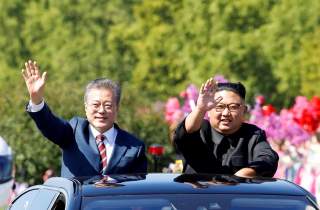 President Trump, perhaps unwittingly, has ignited a process whereby North Korea and South Korea have been warming up their bilateral relations. The South Koreans over the long term remain terrified of North Korean state collapse, and thus sees it in their interest to support economic development in the North. The South is also terrified of a war scenario where they would suffer material and human damage.

So for these and other reasons, South Koreans see it generally in their interest to improve ties with Pyongyang. President Trump, by engaging directly with Kim Jong-Un, has accelerated this North-South process.

The problem is that the end-state logic of such a process could mean the dramatic reduction or complete withdrawal of U. S. troops from the Korean Peninsula sometime in the future: a prospect that would terrify Japan. For a future, united Greater Korea would inevitably—given the record of the past—be more anti-Japanese than anti-Chinese.

Thus, the Chinese see benefits in improved North-South relations because while such a changed regional environment would create challenges, they—the Chinese—could ultimately benefit more than the Americans or Japanese.

I don’t see Kim giving up his weapons: what I see is him making cosmetic reductions with his nuclear and missile arsenal to garner positive headlines, but without fundamentally reducing the threat his arsenal poses. Trump can easily move back to a tougher approach, given the tempestuous, Shakespearean dimension of his unusual personality.

If that happens, the Korean Peninsula could become even more unstable than it was at the start of the Trump Administration. South Korea’s government, in such a case, would be caught in the middle—a bad place for a U.S. ally to be.

The risk of war is real. We are dealing with two outsized personalities, and wars often erupt when neither side sees it in its interest to start one, but incidents and accidents can occur and then fear, honor, and status enter into it.

Robert D. Kaplan is the author most recently of The Return of Marco Polo’s World: War, Strategy, and American Interests in the Twenty-first Century. He is a senior fellow at the Center for a New American Security and a senior adviser at Eurasia Group.