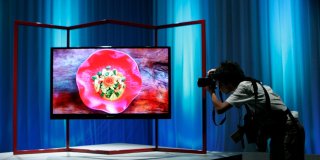 A new report from a South Korean newspaper says that Samsung Display will phase out of making LCD TV panels in favor of newer technologies, such as QD-OLED.

According to The Korea Herald, Samsung Display is “poised to fully shut down its unprofitable liquid crystal display panel business for televisions in June,” after a thirty-year run. These parts are manufactured in the South Chungcheong Province of South Korea.

“(Samsung Display) will terminate its supply of LCD panels in June,” a source told the publication. The report cited Omdia research, which found that prices of 43-inch LCD panels fell 46 percent between September 2021 and May 2022.

One analyst told the Korea Herald that Samsung Electronics is “unlikely [to] be affected by Samsung Display‘s LCD panel exit.” The report added that the rumored collaboration between Samsung and LG, to provide white-OLED panels to Samsung, is unlikely to come to fruition this year.

A different report this week, from CGM Tech, stated that Samsung was cutting its smartphone production goal from the year by 30 million units for the rest of the year.

Samsung’s mind is clearly on newer panel technologies, such as QD-OLED. RTINGS gave the first Samsung model featuring that technology, the S95B OLED, a mixed-usage score of 9.1, placing it in the number one spot in its rankings of the best TVs currently available. LG’s G2 OLED TV is ranked second on the RTINGS list, while another LG OLED model that’s new this year, the C2, ranks third.

Another site, this week, tested out the S95B. Tom’s Guide has published its own review of the TV, describing it as “one of this year’s most intriguing TVs.” The Tom’s Guide review is positioned as the Samsung TV against LG’s G2 OLED evo TV. The review found that while both TVs are above-average when it comes to color accuracy, the LG model ranks better.

In terms of brightness, while the site ranked Samsung’s model ahead of most OLED TVs, it was ranked below the LG model. “There are several factors that go into scoring a TV besides the tested picture performance. We also consider value, design, interface, audio quality, and the remote control in our star ratings,” Tom’s Guide said of the TV.

“That’s why it’s not so simple to crown a winner between the Samsung S95B OLED TV and LG G2 OLED TV. But when we boil it down to the central technology, LG OLED evo beats Samsung QD-OLED. At least it does this year. It’s safe to expect Samsung’s next QD-OLED to up the ante."