Samsung's Galaxy Z-Flip Has a Durability Problem (Among Others) 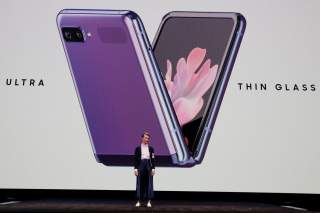 At last year’s ill-fated Galaxy Fold reveal, a procession of Samsung executives took the stage to proclaim to an incredulous audience of tech journalists that folding smartphones are the future. In the following months, a fatal display design flaw forced the South Korean tech giant to recall all review units and to postpone the Fold's launch.

Fast forward to this year's Galaxy Unpacked event. The Galaxy Z-Flip was introduced as a revolution in folding phone design, building on the shortcomings of the Galaxy Fold to offer a true, flagship-level folding phone experience. And yet, Samsung only partially succeeded. The Z-Flip is inarguably the best folding phone on the market, but it still asks too many compromises, at too high a price point, to compete even with Samsung's own flagship Galaxy S20 line.

The problems begin, as they so often do for foldable phones, with durability.

Samsung claimed that the Z-Flip boasted a "new one-of-a-kind, hideaway hinge" with a with total protection against dust and debris, but a recent teardown session by iFixit tells an altogether different story: prolonged exposure to dust can, in fact, penetrate the hinge and prevent the phone from folding properly.

Samsung’s branding proudly labeled the Z-Flip as the first-ever folding glass phone. This is true in the strictest possible sense: the Z-Flip’s screen is, indeed, made out of ultra-thin, bendable glass, produced by German manufacturer Schott. However, that glass is so brittle that Samsung decided to enclose it in a thin plastic layer that covers the entire screen. Alarmingly, a durability test by tech youtuber JerryRigEverything shows that this thin plastic is much easier to scratch than the Gorilla glass panels used by the latest flagship smartphones. The Z-Flip has barely been out for two weeks, but there is already at least one instance of the display cracking at the fold crease--not enough to establish a trend, but definitely cause for concern over the Z-Flip’s long term longevity. The Z-Flip is durable for a foldable smartphone, but that’s quite a low bar to clear given the crippling problems of Samsung’s Galaxy Fold and competing products like the Motorola Razr--meanwhile, it’s markedly more fragile than any traditional flagship smartphone.

Durability is only one of the Z-Flip’s many compromises. Samsung’s presentation made much ado about split-screen compatibility for certain apps when the phone is folded halfway; for example, you can watch a YouTube video on the top half while reading comments on the lower half. But until more apps support it, split-screen functionality will remain more of a gimmick than a selling point. Meanwhile, the mini-display on the phone’s outer edge is certainly better than nothing for conveying basic information like phone calls and missed messages, but not nearly as useful as Samsung’s excellent always-on-display (AOD). The Z-Flip has the same AOD as all of Samsung’s recent flagships, but you’ll need to keep the phone flipped open to see it, thus defeating the point of the portable clamshell design.

None of these drawbacks are inherently fatal--except, perhaps, for the questionable durability-- but consider the steep early adopter’s fee that you’re paying for Z-Flip’s foldable form factor. Samsung’s own top-end S20 Ultra is only $20 more expensive than the Z-Flip at an MSRP of $1400, but demolishes the latter in every specs category.

Samsung may well be right that folding phones are the future, but the current state of foldable display technology isn’t quite there yet. The Z-Flip is more of an intriguing proof of concept than a viable consumer product; a novelty that should be admired, though only from afar.