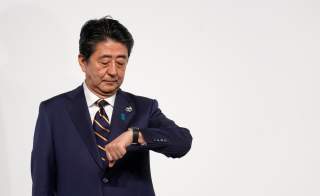 The trade restrictions carried out by Japanese prime minister Shinzo Abe has further exacerbated the discord between Korea and Japan. This is an event that transcends economic friction or diplomatic conflict. It is a strategic war being played against the backdrop of the Northeast Asian regional order and the beginning of a war on history.

Abe instigated this war, to be sure. It was a plot that was formulated from the early stages of his administration. The South Korean government of Moon Jae-in, having prioritized the progress of peace on the peninsula, managed to keep Japan from impeding the course toward peace. However, Abe’s plans are now in motion, under the guise of a protest against our Supreme Court decision to compensate forced labor conscripts.

The root of the current trade dispute lies in a Korean Supreme Court decision made in 2018 that called for Japanese companies to make financial reparations to the Korean victims of conscripted labor, which occurred during Japan’s colonization of Korea.  To be clear, the decision did not hold the Japanese government accountable. Government-to-government compensation was achieved through “The Claims Settlement Agreement of 1965 between Korea and Japan,” and the Korean government has consistently acknowledged this fact. The irony is not lost on Korea, however, that Japan has never acknowledged the illegal nature of their forcible annexation of the peninsula in 1910. At any rate, individual reparations were always treated as a separate matter outside of the 1965 agreement. Issues regarding comfort women and Korean victims of atomic bombings amongst others were raised, and the two governments agreed to work out solutions. As a result, Korea-Japan relations slowly evolved from the 1965 framework.

It is noted that the previous South Korean administration boldly attempted yet failed to exert influence on the court case which dealt with the conscripted labor issue. President Moon is a politician who sees basic human rights as a birthright that should precede any other privilege. He desires to go beyond an age dictated by state-driven violence and usher in a new era defined by a fundamental respect for human rights.

Abe’s government denunciated the lack of intervention by the Moon administration, which was rather baffled by the criticism. As a democracy, Korea has upheld the doctrine of separation of powers. It is hard to conceive of a functioning democracy whose president can overturn the decision of its judicial system. The Moon administration strongly believes in prioritizing and finding a solution that will be accepted by victims, as opposed to being bound by negotiations between governments. This reasoning operates on the belief that human rights are a universal virtue. Nonetheless, Abe’s government has essentially exerted diplomatic pressure with trade restrictions during this delicate process.

It looks as though Abe is now crunched on time, mostly because of Japan’s political agenda. His plan eventually aims to expand the parameters of Japan’s military activities by modifying the peace constitution. Bloc-to-bloc confrontation is believed to provide plausible grounds to achieve his ultimate goal and Abe is capitalizing on the heightening U.S.-China trade war to see it through.

Korea’s unique geopolitical position in a corner of not only Northeast Asia but of the globe has historically forced it to survive the struggles of larger powers. Korea experienced political failures but managed to thrive with its own language and culture. Abe’s economic strike on Korea betrays a broader insecurity over his perception of Korea’s closer positioning to China. As peaceful coexistence with North Korea became a reality, Abe has been openly unreceptive to it. It is hard to fathom that there are people who are still unsure about peace in this era. If Abe continues to aggravate the situation Korea will act defiant but truthfully, it is hurtful. Not because of the industrial cost Korea must bear, but because of the seemingly effortless decision of a neighboring country to antagonize the peninsula. It is painful to witness these changes in a close neighbor.

Abe is hustling Korea to the West. Intent on building a stronger military presence and choosing sides, Abe should see “decoupling” Korea and China as a better “strategy,” yet he has decided to strike Korea. It is almost embarrassing for Japan to even call this strategy, if neither an overt threat nor the taming of a neighbor. The fact that Tokyo is incapable of even making it diplomatically palatable reveals Abe’s poverty of strategy as well. It is alarming to think Japan’s worldview sees the revival of a chaotic Northeast Asia, as it was in the past.

Should Korea shift westward, then Abe will undoubtedly see this as a victory. Korean strategists will not play into his hands with such tactless measures. Our basic strategy will not be reduced to playing tug-of-war with our neighbors, as such political games forced us to endure immense collective suffering at the end of the nineteenth-century. By no means does this suggest we think a “breakthrough strategy” that involves nuclear weapons, as North Korea has done, is an option for us. A policy of “1 alliance plus 3 amicable relationships” served as the cornerstone of the late President Kim Dae-jung’s foreign policy and remains our basic strategy. This basic framework will continue to serve as our guideline for the foreseeable future. Peaceful coexistence on the Korean Peninsula will make this policy more workable because Korea benefits from friendly relations, not hostile ones.

This war on strategy, provoked by Japan, is also a metaphor for two contested worldviews. This strategic war provoked by Japan is a direct challenge by a “conflict-centric worldview” to a “peace-centric worldview.” Abe’s decision is the equivalent of bringing a knife to a gathering on cultural reconciliation. 2018 signaled the beginning of a new era on the Korean Peninsula and Northeast Asia, one that completely differed from previous history. Peace, once a mere fantasy, started to move into the realm of reality. At this juncture, Japan is bringing old-fashioned antagonism and confrontation back to the region. Most Koreans will not comprehend Abe’s prideful obsession with memories of nineteenth-century imperialism. The Moon government must remain resolute in obtaining diplomatic solutions, but this long battle will not be remedied by a simple prescription or a few quick stitches.

There are many Koreans who feel a good rapport with Japanese people and Japanese society. They feel deeply disappointed with the decisions of Abe and like-minded politicians of Japan. The announcement on trade restrictions from Japan came one day after the Three-Party talks at Panmunjom, a historic event that reopened a path to peace on the Korean Peninsula. Many Koreans believe that Abe intentionally disrupted this notable occasion. Internationally, Japanese people and Japanese society are rightfully in good standing. However, a small minority of politicians do not measure up to this high standard. The conflation of national interests and political agendas serve as an ominous warning to the tragedy that is bound to unfold. As a friendly neighbor, it is indeed an unfortunate event to witness.

This dispute can also be described as a historical war between twenty-first-century international relations and nineteenth-century imperialism. Rather than pursue a path of harmony and cooperation, Northeast Asian modern history has been driven by distrust and conflict. During this time of turmoil, the Korean Peninsula paid the largest price. With the 2018 Peace Declaration of the Korean Peninsula, we vowed to overcome bloody power politics, authoritarianism and Cold War politics. Bear in mind, the tragedy of Korea-Japan relations dates back over one-hundred years, precipitated by the ill-judged political decisions of a few Japanese imperialist leaders. It is highly regrettable that Abe’s administration is incapable of taking the first step to put this shameful past behind them. His actions, or lack thereof, are antithetical to the historic progress we have made on the path towards peace, human rights, and freedom.

A character assassination of sorts has been attempted by Japan, framing Korea as an untrustworthy country who backtracked on an agreement. If we look back on history, however, then it was Japan who behaved deceitfully in many cases. In the early twentieth-century, for example, it was Japan who reneged on the Korea-Japan Protocol of 1904. At the time, Japan promised to preserve the sovereignty of Korea, in writing. Yet they robbed Korea of its diplomatic rights the following year. Hence the stern chastisement came from martyr Ahn Jung-geun “because Japan broke her word against Koreans,” as he dedicated his life to fight Japan’s crime against Korea.

Moreover, Japan employs two different yardsticks when dealing with international laws and agreements. Did we see Japan protest with equal vigor when the United States abruptly pulled out of the TPP agreement? Yet their unyielding stance on Korea is a clear double standard. How else is one to interpret this behavior other than as blind submission to larger powers? This is a government that withdrew from a long-standing global agreement to set an international moratorium on commercial whaling, despite their own people’s loss of appetite for it, not to mention universal outcry. I’d like to know: how does this align with the values of a country that insists on abiding by the law, and what does “international law” even mean to them?