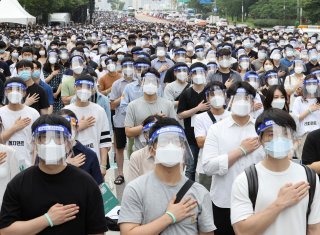 Amid the sudden surge of coronavirus cases on the peninsula, South Korea has adopted enhanced social-distancing measures to limit the further spread.

The East Asian country’s daily new coronavirus cases have topped a hundred for a week straight. On Wednesday, it added a five-month high of 297 new cases, raising the total number of overall infections to more than 16,000, including 300 related deaths, according to the Korea Centers for Disease Control and Prevention (KCDC).

Wednesday’s figure marks the most cases since March 8, when South Korea reported 367 infections. The country was on the verge of putting the global pandemic under control, registering just fifty-six cases last Thursday.

In an effort to control the outbreak, local health authorities have decided to raise the level of social distancing for two weeks in Seoul, Incheon, and the surrounding Gyeonggi Province by one notch to level two in the three-tier system.

“We are facing a critical juncture, as the outbreaks in the Seoul metropolitan area can lead to a new wave of nationwide pandemic,” Korea’s Vice Health Minister Kim Gang-lip said during a press briefing, according to Yonhap News Agency.

“We can only curb the spread of the virus when people strictly follow the social-distancing guidelines.”

Under the enhanced directives, outdoor gatherings of more than a hundred people and indoor meetings of more than fifty will be strictly prohibited, as well as sporting events at stadiums and arenas.

Moreover, facilities that are deemed high risk—including karaoke rooms, clubs, PC cafes and buffets— will not be able to open during the period.

“If the situation is not brought under control despite the stricter measure, (the government) will swiftly raise the level of social distancing,” Kim Sang-jo, presidential chief of staff for policy, told the Korean cable network JTBC.

“If we do not curb the spread of the virus this week, not only the greater Seoul area with a population of 25 million will come under threat, but our everyday lives may come to a halt,” he said.

South Korea has so far weathered the pandemic without major economic lockdowns, as health authorities have largely tapped into aggressive testing and technological tools. Among the methods are using mobile-phone location data and credit-card records for contact tracing and tracking apps to monitor individuals who are quarantined at home.

There are now more than 22.1 million confirmed cases of coronavirus worldwide, including at least 782,000 deaths, according to the latest data from Johns Hopkins University.