Is the South Korea Nuclear Umbrella Worth the Risk to America? 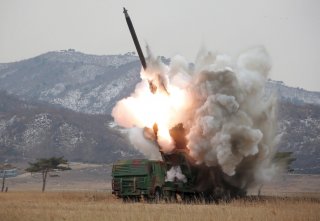 The issue has enlivened the ongoing presidential campaign. Observed journalist Morten Soendergaard Larsen: “Recent resumption of activity at North Korea’s Yongbyon nuclear complex, which is suspected of producing the plutonium needed for the country’s nuclear weapons, has fueled existing convictions among some conservative South Korean politicians that Pyongyang will never agree to give up its nukes so Seoul needs a nuclear deterrent of its own.”

In fact, “the idea of nuclear weapons in South Korea, in contrast to Japan, has never been fringe,” observed Jeffrey Lewis of the Middlebury Institute of International Studies. Roughly a half-century ago, President Park Chung-hee initiated a nuclear weapons program. He was prompted by declining confidence in America’s willingness to defend the Republic of Korea (ROK). Under strong U.S. pressure, he dropped the effort. Had he continued, the United States might not find itself today ensnared in an ever more dangerous nuclear imbroglio on the Korean peninsula.

Nevertheless, support for the option lived on. In 2013, Chung Mong-joon, a long-time National Assembly member and onetime presidential candidate, proposed developing a South Korean nuclear weapon. In a Washington speech he presaged Hong, declaring that “The lesson of the cold war … is that against nuclear weapons, only nuclear weapons can hold the peace.’’

However, the idea causes greater excitement elsewhere. David Vallance and Euan Graham of Australia’s Lowy Institute worried: “the risk of low-intensity conventional conflict between Seoul and Pyongyang would not cease if both sides had nuclear weapons. In fact, they would become more fraught with danger.”

Lauren Sukin and Toby Dalton of the Center for International Security and Cooperation and the Carnegie Endowment for International Peace, respectively, contended: “South Korean nuclear weapons would likely make the regional security situation more precarious. … Instead, strengthening cohesion within the U.S.-South Korean alliance through non-nuclear means offers a viable—and safer—path to address regional challenges from North Korea and China.” Daniel Larison, a contributing editor to Antiwar.com, feared “the effects of South Korean nuclearization on the global nonproliferation regime” and argued that “If the alliance with South Korea needs strengthening, there are other and better ways of reassuring them of U.S. commitment.”

Indeed, to preclude such a possibility some Americans believe that Washington should work harder to convince South Korea that the U.S. government is willing to risk nuclear war and sacrifice American lives. Discussing Washington’s nuclear umbrella over the ROK, Ivo Daalder of the Chicago Council on Global Affairs contended: “The U.S. needs to remember that this is what it’s about. It’s about reassuring the allies just as much as it is deterring the adversary.”

No doubt, friendly proliferation by South Korea—and perhaps other nations, such as Japan and Australia—is not the best outcome. However, that is not the right question for Washington. Rather, U.S. policymakers should ask: Is today’s defense commitment and nuclear umbrella for the Republic of Korea in America’s interest? Should Washington promise to fight a nuclear war on the ROK’s behalf?

During the Cold War, the United States promiscuously handed out nuclear umbrellas. The one over Europe was most believable since Washington had twice intervened in major wars there. The nuclear umbrella over Japan was relatively safe since neither the Soviet Union nor the People’s Republic of China (PRC) was inclined toward aggression. Taiwan was a flashpoint with the PRC, but until recently the latter lacked the means to seriously threaten the island. Australians might have been covered—at least, they believed they were—but the country was far away from any threats.

The Korean Peninsula was the most likely and dangerous potential battleground. However, the fact that the Democratic People’s Republic of Korea (DPRK) was a non-nuclear power minimized the risk. Especially since neither Moscow nor Beijing offered a matching nuclear promise, public at least, to the DPRK. The stakes apparently weren’t important enough to them.

However, those halcyon days are long over. The North now has nuclear weapons and intercontinental ballistic missiles. Although Pyongyang’s nuclear reach remains uncertain, it is steadily growing. Even though Kim Jong-un’s various military wish lists are optimistic, they are portents of the future. Fearsome is the recent Rand Corporation/Asan Institute forecast “that, by 2027, North Korea could have 200 nuclear weapons and several dozen intercontinental ballistic missiles (ICBMs) and hundreds of theater missiles for delivering the nuclear weapons. The ROK and the United States are not prepared, and do not plan to be prepared, to deal with the coercive and warfighting leverage that these weapons would give North Korea.”

Kim wouldn’t launch a first strike—there is no evidence that he wants to leave this world atop a massive radioactive funeral pyre in Pyongyang. However, he could threaten to respond to any regime-ending threat, conventional or nuclear, with nuclear attacks throughout East Asia and on the American homeland. Which would make Washington’s nuclear commitment vastly more costly and risky than when it was first issued. Nothing about protecting the ROK—which long has possessed the means to defend itself—is worth the U.S. paying that price.

The alliance is a means, not an end. It should not be “strengthened” if doing so increases the potential for a nuclear attack on America. Instead, it would be better to close the U.S. nuclear umbrella over South Korea. What Seoul wants frankly isn’t important. The ROK is a valued friend and deserves reasonable notice before Washington made a radical change in defense policy. However, that merely increases the need to act rather than kick the can further down the road.

At which point South Korea’s defense would become Seoul’s responsibility. Then should the ROK go nuclear? That would be the South Korean people’s decision. In which case the arguments offered earlier against the idea likely would ring hollow to those facing a nuclear-armed DPRK. Nuclear nonproliferation is a worthy goal, but so far, the United Kingdom, France, China, Israel, India, Pakistan, and North Korea have followed Washington and Moscow in putting their security first. South Korea probably would do the same.

The world would accommodate the new nuclear power, as it has done with past new entrants to the nuclear club. If Pyongyang ultimately refuses to limit if not end its program, the United States and ROK will have to adapt. Which could ultimately result in a nuclear South Korea.