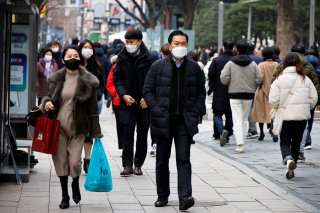 Fueled by an overwhelming surge of Omicron, COVID-19 cases in South Korea exceeded 30,000 for three straight days from February 4 to February 6. The record-setting total of 38,691 cases on February 5 was nine times higher than the totals in mid-January.

Authorities say this is only the beginning. Cases could skyrocket to 170,000 a day by the end of February, according to projections from the Korea Disease Control and Prevention Agency (KDCA). The extreme rise in cases has stretched government resources. Yet trial balloons concerning possibly dropping quarantine requirements are already being floated.

This is due to the relatively mild nature of cases recorded during the Omicron surge. While infections are rampant, there has been a dramatic decrease in the number of hospitalizations and deaths. Of the tens of thousands of newly infected people, only 250 needed to be admitted to the hospital for treatment on February 4, down from 1,000 admissions a day at the start of January. With only twenty-four deaths, the number of recent fatalities is one-third of what Korea was facing four weeks ago.

Instead of filling hospitals, Korea has transitioned to a strategy centered on home treatment. Five hundred community and respiratory clinics have also been set up throughout the country, and people under sixty with mild symptoms are encouraged to seek "one-stop" testing and treatment at those institutions instead of hospitals.

However, the clinics are not distributed evenly throughout the country. And neither are cases; more than half are in the Seoul Metropolitan Area. About half are located in the city of Seoul, while there are two community clinics in Gwangju, two in South Chungcheon, and eight in Busan. Not all of them had been opened by the time the lunar new year holiday of Seollal ended, but the rest are scheduled to be opened next week.

At community clinics, people without comorbidities or symptoms are given rapid antigen tests (RAT). PCR tests, which are more accurate but take twenty-four hours to return results, are reserved for those with higher risk profiles, including seniors, healthcare workers, close contacts of confirmed cases, people told to get tested by a doctor, and those who test positive on a RAT.

Home treatment was introduced during the Delta surge of October and November, and it is now becoming the dominant mode of care. People with mild symptoms stay home and are monitored remotely by healthcare professionals who call to check on their patients.

However, the home treatment system may also reach the limits of its capacity. It was designed to be able to manage up to 109,000 people at a time, but 100,000 people are already under home treatment monitoring, and that number is increasing rapidly.

"Some [healthcare] institutions are already monitoring 200 to 300 people," the Hankuk Ilbo reported.

Authorities have responded by decreasing the number of daily phone calls to low-risk patients and increasing calls to the smaller group of high-risk patients. The plan is expected to double monitoring capacity.

While the overall fatality rate of patients undergoing home treatment is quite low, the Hankyoreh pointed to concerning cases that suggest “the current home treatment system needs to be reviewed.” In one, a seventeen-year-old high school sophomore from Gwangju died four days after being released from home treatment isolation, marking the first teenage fatality from COVID-19. The student was admitted to a hospital when his symptoms worsened, and pulmonary embolism, a condition that can be brought about by COVID-19 infections, was listed as the cause of death.

South Korea has also ramped up the production and distribution of rapid antigen tests. Many businesses provided employees with kits to test themselves before returning to work on February 3 after the Seollal holiday.

The Education Ministry is planning on rescinding its closure rules, which have resulted in some public schools in Seoul being closed for most of the past two years. Schools will be able to decide for themselves whether to remain open at any given time. The ministry did issue nonbinding recommendations, such as a benchmark of less than 3 percent of students testing positive. Schools will be provided with enough rapid testing kits to administer to 20 to 30 percent of students and staff.

Taken broadly, these policy changes are part of a strategy to “manage coronavirus more like the flu.” The Dong-A Ilbo noted on February 4 that it was the first time authorities mentioned they were considering such a change in their mindset. Once the Omicron surge is under control, quarantine and contact tracing may not be part of the future game plan. While quarantine measures are still being mandated to slow the spread of the current surge, the severity of the measures is being weakened. For example, a previous rule that family members of a confirmed patient must quarantine for seven days was lifted.

Son Young-rae, an epidemiologist and spokesperson at the government’s disaster relief agency, pointed to the experience of countries that have reached the projected peak of Omicron earlier. It will “eventually become endemic and will be at a level similar to seasonal flu, and we will also examine the possibility [of easing social distancing restrictions],” Son said.

“I think this is the last hurdle on the way to recovery,” said President Moon, who is leaving office in May. While he also said last November that there would be “no retreat” from “living with Covid,” he eventually suspended the policy.

It is clear that because Omicron is so widespread and generally mild, it won’t be remotely possible to achieve anything approaching “COVID zero.”