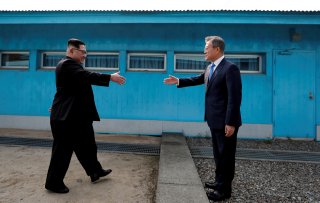 Dealing with North Korea is always painful. South Korea’s President Moon Jae-in found that to be the case when the North rejected his advances after the collapse of the Hanoi summit between the North’s Supreme Leader Kim Jong-un and President Donald Trump. Moon’s humiliation was made complete in June when Pyongyang destroyed the liaison office built by Moon’s government just a couple of years before.

That act was accompanied by a diatribe from Kim’s sister, Kim Yo-jong, against groups, which used balloons to send leaflets into the Democratic People’s Republic of Korea. Acting in seeming obedience to her orders, last month the South’s government-controlled National Assembly voted to outlaw the practice. Observers were left to wonder: what would Pyongyang next demand? And would Moon satisfy that dictate as well?

Last month South Korean foreign minister Kang Kyung-wha commented on the North’s policy toward the coronavirus, also known as the coronavirus, suggesting that the DPRK should join “a regional mechanism aiming to safeguard the health and safety of our people” while noting that “North Korea has not been very responsive to our offer of help on the COVID-19 front.”

Seemingly uncontroversial, even tame sentiments. However, not to Kim, who reemerged publicly for the first time since July and again played attack dog, terming the remarks “impudent” and “reckless” and intended “to further chill the frozen relations between the north and south of Korea.” “We will never forget her words and she might have to pay dearly for it,” he said.

Kim’s verbal roundhouse worked last time. Why not try again, appeared to be her view? Presumably, Pyongyang wants the Republic of Korea to make some profitable concessions to warm those relations, perhaps even toss in a public apology of sorts.

Going forward, the ROK should stop cowering and recognize that it is acting from a position of strength. The North is the Korea that should be changing its attitude and moderating its position.

Most important is the DPRK’s notable economic weakness. The regime compounded lackluster economic reform and tough international sanctions with self-isolation in response to the coronavirus pandemic. The results thwarted the fulfillment of Kim Jong-un’s promise of economic growth to his people. He even failed to deliver a New Year’s talk to the nation—breaking a tradition running back through his father to his grandfather. Presumably, this happened because he had nothing new and positive to say. Russia’s Andrei Lankov, of NKNews and Kookmin University, contended that “The North Korean leader is stressed, bitter and almost certainly sick, too.”

The North’s economic failure leaves the DPRK even more dependent on the People’s Republic of China (PRC) than before. Which is not to Pyongyang’s liking.

Relations between the two nominal allies after Kim’s ascension were poor at best. Xi Jinping refused to meet until early 2018, more than six years after Kim took over. During that period Xi met with South Korea’s Park Geun-hye several times. North Korean officials did little to hide their irritation with, even antagonism toward, Beijing, which approved a series of United Nations sanctions.

However, this is an embarrassing position for the DPRK, which ostentatiously emphasizes Juche, or self-reliance. When I visited the North in 2017, officials highlighted their desire not to be dependent “on any nation,” and it was apparent that they had their northern neighbor in mind even though they wouldn’t specifically name Beijing. However, the regime’s ability to feed its people, especially after repeat typhoon hits, now depends on the PRC’s generosity.

Kim also is losing his American negotiating partner, Trump, and the best hope of easing sanctions. No one is sure what to expect from President-elect Joe Biden, but he is unlikely to be an easy mark for Kim. Biden said he would be willing to meet, but only with preconditions, which could be a dealbreaker for the North.

Moreover, incoming Secretary of State Antony Blinken helped set President Barack Obama’s policy of “strategic patience,” which sought to wait out the North while strengthening alliance ties with the South. Avril Haines, slated to be Biden’s Director of U.S. Intelligence, also played a role under Obama. The two “developed their policies in close consultation with the conservative South Korean governments of Lee Myung-bak and Park Geun-hye.” The resulting approach was tougher and more confrontational.

The Biden team may realize that this strategy is even less appropriate today, given the North’s continuing missile and nuclear developments. Nevertheless, the incoming administration likely will follow its predecessor in insisting on serious disarmament concessions before granting the North the sort of serious sanctions relief that Kim craves.

Moreover, he appears to recognize that he can bully South Korea only so far. The 2010 sinking of the Cheonan and bombardment of Yeonpyeong Island pushed Seoul to the breaking point, with threats of retaliation that the DPRK apparently took seriously since it offered no further provocations. At that point, Kim was being groomed to take over by his father and reportedly was involved in the decisionmaking process.

In September, North Korean border guards killed a South Korean maritime official under bizarre circumstances, using shoot-to-kill orders intended to control the coronavirus. The public reaction in the South was sharp and Kim surprisingly offered what amounted to an apology. Presumably, he worried about turning even the Moon government hostile. With his approval rating sagging badly, Moon has shrinking political room to placate persistently implacable Pyongyang.

Instead, Seoul should press North Korea. There should be no more sovereignty sacrifices like honoring the North’s demand that the ROK restrict the ability of its citizens to contact people in North Korea. Getting more information into the DPRK should be the foundation of both America’s and South Korea’s policy toward the North.

The next outburst by Kim Yo-jong or other important North Korean leaders should be brushed aside with the contempt that it deserves. However, the South would gain nothing by mimicking Trump in trading insults with the Pyongyang. Instead, Moon should respond that he remains eager to bring Koreans together but insists on due respect for his government. Then he should set forth Seoul’s willingness to provide humanitarian assistance and move forward on areas highlighted by Kim in the Singapore declaration, most notably improving bilateral relations and promoting regional peace.

Moon should seek to engage the incoming Biden administration and indicate the urgency of increasing South Korea’s ability to suspend some sanctions in order to move selected bilateral projects forward. Although Kim’s behavior reflects much of the same calculated unreasonableness of his father and grandfather, the younger Kim has implemented more economic reform and engaged in much more international diplomacy than they did. The ROK should test his continuing commitment to both.

Perhaps the best evidence that North Korea has become a normal country will be when diplomacy with Pyongyang looks and feels no different than that with the ROK. No ideological rants. No political breakdowns over trivial incidents. No threats of retaliation and even war.

Of course, today the North is nowhere near acting “normally,” which puts a greater premium on the South insisting on responsible behavior by the DPRK. Insults will be ignored. Demands will be dismissed. Threats will be countered. And Seoul will move on, waiting for the tantrum to pass.

This approach might not improve North Korea’s behavior. But at least the ROK would no longer reward Pyongyang’s seeming endless misbehavior.