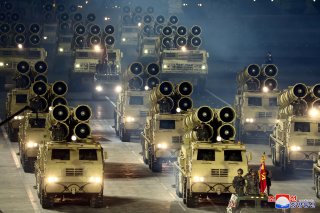 Ten years ago this month, North Korea welcomed the world for a party like no other. Diplomats, journalists and tourists — including me — were invited to Pyongyang for a weekend of extravagant celebrations, including mass games, performances on the plaza and a massive military parade. The entire city was giddy with anticipation.

The event: the 65th anniversary of the ruling Workers’ Party. But the real occasion for celebration: the public debut of Kim Jong-un, the baby-faced young man tapped to become North Korea’s next leader. As he stepped forward, in a dark blue Mao suit, to salute the troops, one of my North Korean guides wept.

This pandemic year, the festivities were hardly what Kim Jong-un would have wanted for the decade anniversary of his debut. And yet, the events — though small — were dramatic.

Ten years ago, North Korea used the milestone anniversary to unveil a new weapon: a medium-range ballistic missile (or a mockup of one) that sent a threatening message to the Obama Administration about Pyongyang’s intention to build a weapon capable of striking U.S. targets in violation of UN Security resolutions that bar the regime from missile and nuclear activity.

Likewise, this year’s parade was an occasion to show off a new, bigger intercontinental ballistic missile, as well as a submarine-launched ballistic missile and short-range missiles capable of precision strikes on closer targets such as South Korea. Again, whether they are mockups or the real thing, they signal Kim’s determination to continue strengthening his arsenal, in defiance of UN Security Council resolutions, military agreements signed with South Korea in 2018 and Kim’s “special” friendship with President Donald Trump.

In a dramatic twist, the parade apparently was held in the middle of the night, providing a bold backdrop for the weaponry — perfect for propaganda in a year when foreign diplomats were told to stay away, Western journalists and tourists have been barred from entry to the country, and the regime can’t promise the people a big party.

On Saturday, Kim sought to emphasize to his people that they should celebrate his success in building weapons powerful enough to defend them from foreign military aggression.

The show of weaponry also served as a reminder to the outside world that North Korea continues to refine its arsenal, in spite of the unprecedented diplomacy of 2018 and 2019.

And they foreshadow tough negotiations for whoever is in the White House in January 2021 as well as complicate the South Korean government’s campaign to engage Pyongyang.

Kim also sought in his speech Saturday to show that he has his people’s well-being in mind.

Throughout 2020, the very real threat posed by the global pandemic has provided an opportunity for Kim to show his people he is taking quick, aggressive action to protect them from a different kind of outside threat: the new coronavirus.

On Saturday, he acknowledged the hardships the North Korean people are undergoing, but sought to pin the blame on circumstances largely beyond his control, which he characterized as “unforeseen challenges posed by the epidemic and the forces of nature, as well as the military threats by the hostile forces.”

Kim also used the speech to show a bit of humility, painting himself as suffering alongside his people.

“At last on this glorious night we are greeting the Party's founding anniversary of this year, which was beset with unprecedented difficulties,” he said tearfully. “I don't know why, but this fact alone moves me too much.”

In displaying vulnerability, Kim is seeking to show his people that he is human, too, despite the mythology wrapped around the Kim family.

It’s interesting: There is no question that we have a better picture today of this complex young man than we did when he stepped forward 10 years ago, a total mystery to the outside world.

And yet, these shows of humility, as welcome and as illuminating as they are, should not deflect attention from the darker sides of his personality and rule.

While he seeks to cast blame for North Korea’s hardships on external forces, it is his family’s policies that have left North Korea in a state of isolation and poverty. While he builds costly ballistic missiles and nuclear weapons that draw ever-tighter economic sanctions, his people go without food, heat, electricity, medicine and clean water.

This milestone, which Kim has marked with new weapons, should also serve as a reminder to us that it’s been 10 years since we got a glimpse on Kim Il Sung Square of what this young man’s life mission would be. Today, he is closer than ever to his goal of forcing the world to acknowledge North Korea as a nuclear weapons state, even as his people suffer in the shadows.

We have squandered the first 10 years of Kim’s nascent career to change the course of diplomacy and North Korea’s trajectory. We should not waste the next 10.

Jean H. Lee is director of the Hyundai Motor-Korea Foundation Center for Korean History and Public Policy at the Wilson Center (where this first appeared) and a former foreign correspondent who opened the AP’s Pyongyang bureau in 2012. You can follow her on Twitter and Instagram @newsjean.

FILE PHOTO: Military vehicles are seen during a parade to mark the 75th anniversary of the founding of the ruling Workers' Party of Korea, in this image released by North Korea's Central News Agency on October 10, 2020. KCNA via REUTERS.