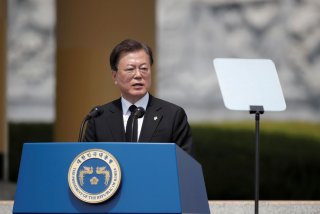 Two months ago, Moon Jae-in bestrode South Korea with a stature belied by his average height. He was that rarest of entities in South Korean politics: a president approaching his fourth year but is not a lame duck, thanks to his party’s historic victory in April’s National Assembly elections. What meager success stories the opposition party did enjoy—the election, for the first time, of North Korean defectors to the National Assembly—had been undermined by those defectors’ all-too-confident assertions of Kim Jong-un’s severe health woes.

Sure, there were problems: North Korea sending test missiles into the sea rather than olive branches to Seoul, protracted negotiations with the U.S. over defense burden-sharing and, in case you forgot, a historic pandemic that sank economic activity.

Even the latter, though, appeared to have worked to Moon’s benefit: his country’s low-cost, hi-tech response to the outbreak had been hailed as a model by those who contrasted it with the draconian (and not still not entirely effective) approach taken by China and the deadly disorder found in the United States. Like the Queen of Sheba before King Solomon, outsiders hailed the Moon administration as a model of good governance, “How happy your people must be! How happy your officials, who continually stand before you and hear your wisdom!”

So much for that. With a single explosion (and several press releases’ worth of invective) North Korea has unraveled Moon’s greatest diplomatic accomplishment. For reasons only the North fully understands, Pyongyang has cut off contact with the South, blown up the short-lived inter-Korean liaison office and released a series of statements so harsh that it boggles the mind that the two leaders literally embraced at the border two years ago.

Having failed to change North Koreans’ minds, Moon’s immediate concern will be preventing further escalation, before he can move on to (gulp) addressing the pandemic’s economic fallout, which is only beginning to set in.

Yet there are three reasons why Moon need not despair yet.

1. When it comes to North Korea, the blinders are off

What explains Pyongyang’s new hard-edged approach to inter-Korean relations? Before answering that: What explained their turn toward negotiations in 2018, despite Kim Jong-un’s prior years of isolation? What about their sudden departure from the Six-Party Talks in 2009 and escalation in nuclear and missile testing, despite a new opportunity for dialogue with the United States? Or what about their embrace of the Sunshine Policy in 2000, after demonizing it for months and years prior?

Observers can look at any number of factors, and North Korea certainly isn’t going to help us figure it out, but in each case it appears North Korea’s shifts in tone have been driven by their own internal dynamics, rather than an outside factor. North Korea is surely displeased that its negotiations with the Trump administration did not produce sanctions relief, but an accommodating administration in Seoul would make for an odd target for the venting of such frustration. This points to North Korea had reasons for its recent actions originating at home, not dependent on the outside world.

On the downside, this means one can do everything “right” (at least as the Sunshine supporters define it) and North Korea will still disassemble cooperation with little advance notice. On the upside, Moon’s diplomacy in 2017-18 accomplished what was intended: it prevented war between the United States and North Korea. Moon should now no longer face pressure to deliver on inter-Korean cooperation because there’s nothing more he could have done.

2. Some of the darker theories about inter-Korean talks appear discredited

Once the talk of a Second Korean War subsided, a different set of fears manifested: that Kim Jong-un had his eye on unification under the North’s control, and that South Korea’s ruling progressives would be willing accomplices. Some of the Moon administration’s actions fed into those fears, including sending defectors back to North Korea last fall and reassigning prosecutors investigating his office for corruption in January. More recently, Moon’s government cracked down on defectors who sent leaflets into the North (the ostensible source of Pyongyang’s recent rage).

But it is telling that North Korea did not capitalize on such moves by rewarding the South with further diplomacy, or even toning down its invective. Whatever the North seeks to accomplish domestically—perhaps the elevation of Kim Yo-jong—it clearly takes precedence over cowing the South. And while Seoul has not done its liberal democratic ideals proud by censoring these defectors, its response to the latest provocation from Pyongyang suggests it is none too happy with its neighbors to the North.

Rather than a grand conspiracy to create a unified Kimist Korea, it instead appears South Korea has a mere failed attempt to appease a tempestuous tyranny.

As bad of a month as Moon has had, his party’s commanding lead in the National Assembly remains, and he still has a successor waiting in the wings in representative Lee Nak-yeon. Moreover, his conservative opposition has yet to find a suitable standard-bearer for challenging their dominance. Moon can still set the country’s legislative agenda and set a new course for himself in foreign policy.

It won’t be easy; Seoul’s relations with the United States remained strained by trade and troop talks, ties with Japan remain fraught thanks to the pending decision on liquidation of a Japanese company’s assets over wartime reparations, and Seoul has been wary of offending Beijing, its largest trading partner. But new opportunities for growing regional clout have presented themselves, thanks to further engagement with the Quad-plus, as well as an invitation to join the G7.

South Korea can also take a page from the ruling bloc in Taiwan—not as a thorn in China’s side or as committed separatists, but as ardent defenders of democracy in a region where it appears increasingly imperiled.

Doing so would take diplomatic savvy and were surely not Moon’s goals when he took office, but the North’s recent moves suggest nothing is left of his original initiative of a new era of inter-Korean cooperation.

And as Kris Kristofferson might have put it, having nothing left to lose can look a lot like freedom.