Time for a Peace Declaration for the Korean Peninsula 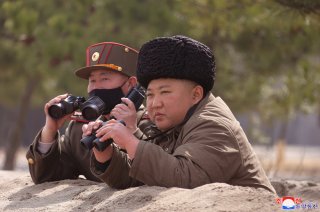 One senses that the Biden administration is becoming desperate. How will it get North Korea to communicate?

It’s a relatively new question. Not too many years ago engagement wasn’t an issue. Relations were nonexistent and contact limited. For instance, after George W. Bush’s designation of the Democratic People’s Republic of Korea as a member of the “Axis of Evil,” few would expect a welcome word from Pyongyang.

However, President Donald Trump transformed the relationship. Two full summits and one truncated DMZ meeting, significant contact among other officials in both Washington and Pyongyang, and twenty-seven “love letters” between the two leaders created a very different set of expectations.

Yet so far Kim Jong-un has rejected Washington’s advances. An evidently frustrated Deputy Secretary of State Wendy Sherman recently complained: “We have reached out directly to Pyongyang and stand ready to meet without preconditions, and as we have said publicly on multiple occasions, the United States does not harbor hostile intentions toward the DPRK.”

Of course, “hostile intentions” are in the eye of the beholder. The United States retains an alliance with the Republic of Korea directed against the North, deploys significant military forces throughout the region to back that commitment, and routinely attacks weaker states, often without international legal sanction. It should surprise no one that Kim continues to express skepticism of American policy.

Moreover, Kim has reason to play the reluctant suitor even after the brief, tempestuous Trump “love affair.” He might believe he was played false in Hanoi, though Trump administration officials insist that the problem was mostly on North Korea’s side. In any case, an important opportunity was lost and Kim was publicly embarrassed, not a position any dictator enjoys.

Another possibility is that Kim hopes to use ongoing missile developments, recently showcased to the world, to wring further concessions from Washington. North Korea watcher Andrei Lankov has noted that “showing off kinetic capabilities while also signaling openness to dialogue are not contradictory at all for the North Koreans. The regime is run by people who are masters of survival. And their goal is to nudge the U.S. toward relieving sanctions while working to ensure the election of a pro-engagement president in the South.”

Even former Deputy Secretary of State Steve Biegun has pointed to optimistic signs of negotiations to come.

“I will say that there's a school of thought and I'm inclined to believe it that . . . the fact that North Korea is beginning to send external messaging suggests to me that North Korea is at least contemplating the terms under which it will reengage with the rest of the world,” Biegun said.

The United States does have a strong incentive to negotiate with the North since the alternative, an updated form of “strategic patience” ignoring Pyongyang’s activities, is not an option. With a forecast that the Democratic People’s Republic of Korea could have two hundred nuclear weapons by 2027, a concerted effort to freeze if not reverse the North’s progress is essential. Yet Washington wants to avoid appearing to be too eager, which would advantage Pyongyang.

Seoul and Washington were united in seeking better relations with North Korea when Kim turned to summitry in 2018. After the failure of the Hanoi meeting, however, Kim turned not just frigid but dismissive toward the ROK, apparently angry that the latter would not deliver any benefits to Pyongyang without U.S. approval. Kim proved little more willing to talk with America, but at least acknowledged its essential role in winning any sanctions relief.

However, Kim recently staged another policy pirouette and turned back to Seoul. He offered to restore the inter-Korean hotline, which was done a couple of weeks ago. It is an important reversal from last year when the DPRK demolished the liaison office constructed by Seoul. The most plausible reasons for the latest shift, as Lankov suggested, are to push the U.S. towards sanctions relief and create favorable tailwinds for the March ROK presidential election.

This process might provide an opportunity for Washington. “From my point of view, the most important thing is, in fact, a communications link,” observed Biegun. “So I very much welcome the fact that South Korea and North Korea are directly speaking again. And I hope the case will be soon, if it's not already, that the United States will be able to find a way to open and then sustain communications with North Korea for its part.”

This possibility has led to increased conversation between Seoul and Washington. Last week representatives of South Korea, Japan, and the United States met to discuss policy toward North Korea. America’s Special Representative for the DPRK Sung Kim urged the North to “engage in sustained and substantive dialogue.” Although public attention was focused on various DPRK missile tests, diplomats involved said that the majority of discussion, perhaps 60 percent, was on proposals for a peace declaration to help entice the North to make an agreement.

“South Korea and the U.S. have reached a consensus that the declaration on the war's end is quite useful as an opportunity to resume dialogue with North Korea,” the official said. They later added that “this consensus is gradually growing.”

Others involved in the conversation indicated that this claim overstated the level of agreement. The differences between Seoul and Washington reportedly are modest but important. The South contends that a peace declaration would be symbolic and nonbinding, and thereby would have no practical impact. However, it could be used to help entice North Korea to enter talks.

In contrast, the Biden administration apparently worries about unintended consequences and prefers to offer such a proclamation as part of a process toward denuclearization after progress has been achieved. “The US deems it highly necessary to examine the impact of adopting the end-of-war declaration, and is considering it in depth internally,” according to a South Korean official. Indeed, The Hankyoreh claimed that the State Department brought in outside lawyers to review the proposed proclamation. Nevertheless, ROK representatives privately predicted that Washington would ultimately back an effort led by the South to use a proposed statement to jump-start talks.

U.S. objections are based not on what such a declaration would do, which is nothing, but on how it might affect support for the alliance. That is, acknowledging the obvious, that there is no ongoing war, might encourage some policymakers to argue against continued military exercises and/or deployments in the South and even Japan and continued sanctions on the North. Such a statement also might be seen by the DPRK, at least, as a reward for its proliferation activities. And to reduce criticism of Pyongyang would irritate the bipartisan War Party on Capitol Hill (remember Sen. Lindsey Graham’s (R-S.C.) cheerily idiotic endorsement of nuclear war on the peninsula, since it would be “over there”).

This is a very weak bill of particulars against a peace declaration. The United States maintains alliances with and troops in Germany and Japan, as well as a large supporting cast of nations, even though World War II formally ended. The lack of a legal state of hostilities is irrelevant. What matters is the reality on the ground.

Instead of emphasizing the continuing need for an American presence, alliance advocates apparently fear a long overdue debate might break out. Those on the hawkish side appear to doubt the strength of their own case. After all, almost seven decades after the conclusion of hostilities the ROK is dramatically stronger—significantly greater population, vastly larger economy, enormous technological edge, much more international support. Changing circumstances, not the formal legal status of a conflict years in the past, is what raises doubts about the necessity of America’s continued presence.

In any case, a peace declaration should merely be the starting point. It should be an enticement for talks, with the expectation of more to come, including a formal treaty ending the war. “Because this would be a lengthy process, Washington and Seoul should discuss what ending the war would mean in the short, medium, and long term, and how to manage risks associated with it,” suggested Jessica Lee, a senior research fellow in the East Asia Program at the Quincy Institute. “Ideally, such consultation would take place before moving from an end-of-war declaration to a peace treaty replacing the Armistice Agreement.”

North Korea remains a problem with only the second-best answers. South Korean President Moon Jae-in is in a hurry though since only five months remain before the election of his successor. However, President Joe Biden also should be in a hurry since the North continues to expand its arsenal. Once the DPRK possesses a certain ability to threaten the American homeland, the alliance with the ROK will be placed in doubt. Kim appears to have opened the door ever so slightly to a peace initiative. Washington should back Seoul in moving forward as quickly as possible.