The True Burden of the Unending Korean War 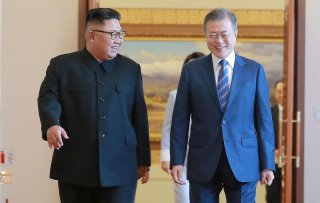 The seventieth anniversary of the outbreak of the Korean War was on June 25. It served as a breaking point of the geostrategic divide in East Asia just five years after the end of World War II and also returned massive military violence to the world stage, ending the brief regional peace which followed the defeat of the Japanese Empire. The nightmare that there be a resurgence of military violence on the Korean Peninsula never truly went away. The grim prospect still haunts the region, now all the more terribly as North Korea has been desperately arming itself with nuclear weapons and missiles. Unless the two Koreas can be peacefully reunified and denuclearization achieved, the scars of war cannot heal nor the nightmare of war fade away.

Recently, North Korea raged against South Korea once more. It brutally blew up the inter-Korean liaison office at Kaesong and threatened the South with a military strike. Pyongyang seems prepared to pick up its traditional “brinksmanship policy” again and rail against South Korea and the United States for the failure of diplomacy over the past two years, hugely unsatisfied with its still-empty hands following the series of summit meetings with President Donald Trump and South Korean president Moon Jae-in. Something worth noting about the present moment is the strategically shifted regional landscape as a result of the emergence of great powers-centered strategic competition between China, Russia, and the United States. Does this factor entice North Korea to explore an avenue of military adventurism once again?

The outbreak of the Korean War stemmed largely from Kim Il-sung, the first-generation North Korean leader, who attempted to leverage the backing of the former Soviet Union and Maoist China to annex the South. At that time, the PRC’s founding father, Mao Zedong, had totally tied Red China to the Soviet Bloc and so was willing to aid Kim Il-sung in rolling back the American military in Korea. The Korean War was a classic proxy war between the two superpowers: the U.S. and the USSR. It would be a grave miscalculation on the part of Kim Jong-un and Kim Yo-jong to think that the deterioration of China-U.S. relations and long-soured ties between Moscow and Washington might serve as grounds for another go at military adventurism.

First of all, China has no interest in a new Cold War with the United States. No matter what punches the Trump administration has been throwing China’s way—trade war, high technology war, media war, even financial war—China has been dodging and punching back in its own ways. Additionally, Beijing doesn’t have an interest in holding Pyongyang within its arms as a sphere of influence: since the normalization of relations with Seoul in 1992, in spite of Pyongyang’s irritation and opposition, Beijing has been unequivocal in its conviction that it must choose South Korea over North Korea regardless of its military alliance with the North. With the Trump administration pushing “decoupling” from China, Beijing has been even more conscious of the irreplaceable value in preserving close trade relations with the South. While Beijing would certainly not want to see any U.S. military strikes against North Korea, that doesn’t mean it would encourage Pyongyang to be hostile toward Washington and Seoul either. Any form of military conflict on the Korean Peninsula would most certainly harm China’s national interests.

The Korean War should be over and never return. Strategic competition between China and the United States might fall back into the footprints of great-power rivalry, both historical and theoretical, but, for the twenty-first century, such competition would be more manifest in maritime Asia than continental Asia. The Korean Peninsula is a nexus of these two domains, but a return to war makes absolutely no sense.

Zhu Feng is both Dean of the Institute of International Relations and Executive Director of the Collaborative Innovation Center of South China Sea Studies at Nanjing University.