Trump Meets Kim at the DMZ: Useful Symbolism, but Little Substance Yet 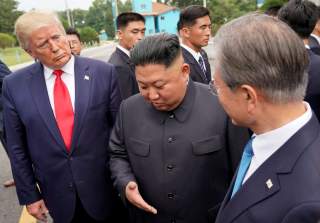 The sight of President Donald Trump at the Demilitarized Zone (DMZ) shaking hands with North Korean leader Kim Jong-un and being the first sitting U.S. president to cross over into North Korea was powerful symbolism indeed. It suggested that the collapse of the Hanoi summit may have been merely a temporary setback and the rapprochement between the United States and the Democratic People’s Republic of Korea (DPRK) was back on track. Whether or not that assumption proves true depends very much on how realistic Washington’s objectives are going forward.

Despite partisan sniping back home, Trump deserves credit for making a serious effort to reduce the long-standing hostility between Pyongyang and Washington. Nothing symbolizes that frozen conflict more than the existence of the DMZ between North Korea and U.S. ally South Korea. Despite its ironic name, the DMZ is the most fortified border in the world. One should not dismiss the importance of symbolism; the sight of the two leaders using the DMZ as a cordial meeting place, and seeing an American leader enter the DPRK (however briefly) sends a message that a more peaceful future on the Peninsula is possible.

Trump continues to catch flak for his friendly relationship with Kim and other foreign tyrants. Indeed, some critics allege that he prefers them to democratic leaders. Although Trump does sometimes go too far in expressing compliments to autocrats in diplomatic settings, conciliatory rhetoric is inherently a feature of successful diplomacy. The importance of the personal relationship that the president is trying to develop with Kim should not be underestimated, much less ridiculed. One component of President Nixon’s rapprochement with China was his conciliatory personal discussions with Mao Zedong and Zhou Enlai.

Still, personal diplomacy and cordial summit atmospherics go only so far in resolving difficult substantive differences. U.S. leaders need to be far more realistic than they have been about attainable objectives regarding North Korea. Concluding a peace treaty with the DPRK formally ending the state of war on the Peninsula certainly is achievable. Establishing formal diplomatic relations between the two countries is entirely realistic and appropriate. (Indeed, many experts believed that such an agreement was going to emerge from the Hanoi summit.) Formalizing the current informal arrangement in which North Korea refrains from conducting nuclear and most missile tests in exchange for the United States continuing to put its annual joint military exercises with South Korea on hold is an achievable goal. Phased reductions in U.S. economic sanctions in exchange for Pyongyang providing a comprehensive accounting of its nuclear and missile inventories is an attainable agreement.

Getting North Korea to give up its small nuclear arsenal and put itself at the mercy of security guarantees that the United States and its East Asian allies might offer is not a realistic or achievable goal. The Trump administration and the broader American political and foreign policy elite need to accept that reality, however unpleasant it might be. Washington’s own policies around the world over the past two decades have eliminated whatever slim chance Pyongyang might have capitulated on that point.

Indeed, DPRK leaders would be colossal fools to implement complete denuclearization. The United States has not treated non-nuclear adversaries, including Serbia, Iraq, Libya, and Iran, at all decently. The Libya episode was especially instructive for Pyongyang. Washington and its European allies concluded an agreement with Muammar Ghaddafi in which Libya abandoned its embryonic nuclear program in exchange for the West lifting sanctions on the country and readmitting it to international institutions. Less than a decade later, the Obama administration stabbed Qaddafi in the back and launched air and missile strikes against his military to help rebels overthrow his regime.

Even Trump’s conduct elsewhere in the world would hardly inspire North Korean trust. In May 2018, the administration repudiated the Joint Comprehensive Plan of Action, the multilateral agreement to restrict Iran’s nuclear program. More recently, Trump warned Tehran that if war breaks out, it would end with Iran’s obliteration. One can hardly imagine a stronger incentive for the DPRK to insist on retaining a small nuclear deterrent.

It may still be possible to win agreement from Pyongyang for limits on its nuclear and missile arsenals as part of a comprehensive peace settlement. Such an arrangement should be acceptable to Washington. Various experts have pointed out that nuclear weapons are very effective for deterrence but not for war-fighting or even attempts at intimidation. In addition to America’s vast nuclear and conventional military power, several of North Korea’s neighbors deploy formidable militaries, factors that Pyongyang would have to take into account if contemplating aggression. Using a nuclear arsenal for aggression is improbable except in the unlikely scenario that a country’s leadership intends to commit national and personal suicide. Contrary to the pervasive myth of a “crazy” North Korean regime, there is no credible evidence that Kim and his cronies are irrational, much less suicidal. Ruthless and brutal, yes, but not irrational.

The United States can learn to live with a DPRK that possesses a modest nuclear capability, however frustrating it might be to abandon the goal of total denuclearization. But such a goal was always quixotic, and U.S. leaders need to face that reality. The Trump administration has the opportunity to move beyond the symbolism and atmospherics of the handshake at the DMZ and negotiate a beneficial, albeit limited, accord with Pyongyang. It should seize that opportunity.

Ted Galen Carpenter, a senior fellow in security studies at the Cato Institute and a contributing editor at the National Interest, is the author of twelve books and more than eight-hundred articles on international affairs.