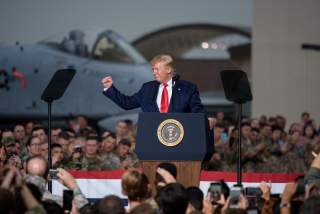 As U.S.-North Korean negotiations broke down, Supreme Leader Kim Jong-un resumed short-range missile tests. President Donald Trump dismissed Kim’s gambit, explaining that Pyongyang had broken no agreements and Kim “likes testing missiles.” Although the Republic of Korea and Japan complained that the North was targeting them, the president was right to emphasize American security.

Today the Democratic People’s Republic of Korea is seen as a threat to America. But objectively there is no reason the DPRK should matter much to Washington. North Korea is a small, impoverished, and distant state. The world is full of similar nations largely irrelevant to American security. The advantage of being a superpower is that one faces few serious and very few existential dangers.

Until Pyongyang’s recent development of ICBMs capable of targeting the U.S., the North had no means to strike America. Even if Pyongyang continues its nuclear developments, it will not start a nuclear war since doing so would mean the annihilation of the Kim dynasty and other ruling elites. States like North Korea have far more reason to fear the U.S. than the latter has to fear them.

The DPRK is an issue for Washington only because the latter intervened in Northeast Asia. That is, America waged war against North Korea and extended a security guarantee to, negotiated a “mutual” defense treaty with, and deployed troops in the ROK. Which made the U.S. a danger to North Korea. Hence the latter’s desire for an effective deterrent.

There were good arguments for preventing the North from swallowing the South 66 years ago, but acting as the latter’s guarantor today is entirely discretionary. Washington is micro-managing affairs in Northeast Asia because it wants to do so, not because it needs to do so. North Korea matters far more to its neighbors—most notably South Korea, Japan, China, and Russia. Yet for years Washington took responsibility for the South’s defense, treated Tokyo as defense dependent, and confronted the North’s nuclear activities.

Analysts believe that Pyongyang used its latest missile tests to advance development of a more maneuverable weapon better able to evade missile defenses. Thomas Karako at the Center for Strategic and International Studies called it a “significant capability.”

Nevertheless, the president tied the tests to what he called “the ridiculous and expensive exercises” by the U.S. and South Korean forces, and cited Kim’s letter to him. Trump admitted that the North’s behavior “disturbed some of my people” but added: “I’m not happy about it. But again, he’s not in violation of an agreement.” The president noted that “There have been no nuclear tests. The missile tests have all been short-ranged—not ballistic missile test. No long-range missiles.”

In this judgment, he appeared to be at odds with his own staff. Complained then-National Security Adviser John Bolton: “The UN resolution prohibits the launch of any ballistic missiles.” More recently, Defense Secretary Mark Esper declared that “Obviously, we are concerned about the short-range ballistic missile tests. We want to understand what they’re doing and why they’re doing it.” (Actually, the reason is pretty obvious.) However, he added, “we aren’t going to overreact. We want to take a measured response and make sure we don’t close the door to diplomacy.”

Bolton also pointed out that Washington’s allies are “quite concerned about it. The latest test of a missile we denominate the KN 23, we think the range could probably hit all of South Korea and parts of Japan. That, of course, would endanger our deployed forces as well.” (Deployed in other nations to protect them, not America.)

Japanese Prime Minister Shinzo Abe raised his concerns publicly, stating that it was “extremely regrettable for us to experience another round of the launch of the short-range ballistic missiles.” The South Korean Joint Chiefs of Staff declared: “North Korea’s consecutive missile launches do not help alleviate tensions on the Korean Peninsula and we urge them to cease such actions.”

However, American policy should not be determined by allied upset. Other nations should bear the chief responsibility for their own security. And President Trump should focus on America’s defense. Which should include asking, why is the U.S. making itself a target of a nuclear North Korea?

American involvement in the Koran peninsula was necessary after Japan’s defeat in 1945, especially as relations with the Soviet Union deteriorated. The alternative would not have been an independent Korea, but an entire peninsula dominated first by the Soviets and later by Kim Il-sung or someone like him.

However, the balance of power in the region long ago shifted. By the 1960s the ROK took off economically and began moving past the North. With the collapse of the Soviet Union and reforms in the People’s Republic of China, the DPRK found itself effectively bereft of allies. Around the same time, South Korea moved to democracy, completing its edge over the North. Today the South enjoys an economy estimated at 54 times the size of the DPRK’s.

Which raises the question, why is Washington still protecting the South?

In fact, President Trump asked this question for years, believing that wealthy allies take advantage of Washington. In 1990 he complained about “being ripped off so badly by our so-called allies,” including the ROK. At a recent political rally, he declared: “one country—I won’t say the country—but one country we spend a lot of money on, defending, very dangerous territory.” He said he ordered U.S. officials to “call them, and ask for the rest of” America’s expenditure.

Last year the administration demanded almost double the previous annual host nation support of roughly $855 million when renewing the five-year agreement. President Moon Jae-in’s national security adviser, Chung Eui-yong, said “We are experiencing difficulties because the U.S. side abruptly brought up a condition totally unacceptable to our side at the last stage of negotiations.”

The South argued that it provides land rent-free, which should be counted as a contribution. The ROK also paid most of the $13 billion for a new base at Pyeongtaek, though South Koreans also wanted to move the U.S. out of Seoul. So great was the disagreement that the U.S. and ROK agreed to only a one-year extension, with an eight percent increase for one year.

Then Washington upped the ante, demanding about $5 billion a year to more fully pay for America’s defense commitment. Trump said: “They’ve agreed to pay a lot more and they will agree to pay a lot more than that.” The president said he wanted Seoul to pay the full cost of maintaining U.S. forces on the peninsula.

He tweeted: “South Korea is a very wealthy nation that now feels an obligation to contribute to the military defense provided by the United States of America. The relationship between the two countries is a very good one.” But not that good. South Koreans like their cheap if not free ride and refuse to consider such an increase. However, they fear that Trump might act on his threats and order a troop withdrawal. During the campaign he said that if U.S. allies don’t pay—the ROK is not the only country receiving a bill—“they’re going to have to defend themselves.”

South Korean Gen. Chun In-bum stated: “President Trump’s comments will not gain the respect of the Korean people.” But the president is not after respect. Will Seoul pay? Negotiations on the rest of the multi-year deal are pending.

Most South Koreans want to keep Americans in Korea. Even South Korea’s left-wing presidents dropped their opposition to America’s presence when elected. But the Moon administration’s position is not so clear. Last year Moon Chung-in, President Moon’s special adviser for foreign affairs and national security, allowed: “For me, the best thing is to really get rid of [the] alliance.” He said this was his personal view and he was not advocating an immediate U.S. military pull-out, but nevertheless came under heavy political fire.

Conservative former national security adviser Chun Yung-woo observed: “I don’t think [leftwing officials] will ever ask the U.S. to withdraw. But if President Trump decides to withdraw because of this cost issue, I don’t think any of them will cry over that kind of decision.”

This talk horrifies members of what Ben Rhodes called “The Blob,” residents of Washington’s foreign policy hive. For instance, Bruce Klingner of the Heritage Foundation argued that the alliance’s “enduring motto is katchi kapshida—‘we go together’—not ‘we go together, if we are paid enough’.”

The president’s fixation on money admittedly is short-sighted. However, past ties do not justify preserving an alliance that has lost its purpose. American troops are not necessary to protect the ROK. Nor is South Korean participation likely to materially aid the U.S. in a war with others, most importantly China. Seoul is unlikely to make itself a permanent enemy of the PRC by aiding the U.S. in contingencies that do not involve the ROK, such as an invasion of Taiwan. Which means the South is of little value in containing China.

Even if South Korea was theoretically willing to join such a conflict, how effective would it be? As Alan Tonelson, founder of RealityChek, a public policy blog focusing on economics and national security, observed: “the [ROK-Japan] quarrel’s outbreak and intensification represent the most important evidence to date that both Japan and South Korea care little about providing such support in an effective way—which unavoidably requires them to work together. How can they cooperate, and thereby effectively reinforce U.S. military operations, if they literally won’t even talk to each other about current or emerging battlefield conditions and threats?”