Trump Wants South Korea to Pay More for U.S. Forces. Here Is What He Should Offer as a Sweetener. 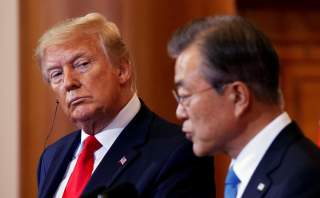 U.S. President Donald Trump is demanding America’s South Korean ally pay more for the stationing of U.S. forces here. Trump’s demand is, according to CNN, is a 400% increase for U.S. support above last year. This has unsurprisingly jolted the South Korean public and government, leading to an uncomfortable debate in the media here. Even the conservative papers - naturally more sympathetic to the U.S. and hostile to North Korea – have blanched at such a sharp spike. As Kevin Drum pointed out, Trump’s request is proportionally akin to $50 billion in the US budget. It is a lot of money.

In my experience in South Korea, most analysts and a fair amount of the public accept that South Korea should pay more. It is understood that South Korea is fairly wealthy now and should contribute more as its economy expands. And broadly speaking, it has over the years. Seoul’s contributions have slowly crept up as its economy has matured; today the burden is roughly equally shared. Despite all the gnashing of teeth and acrimony when the Special Measures Agreements – SMA, the alliance’ framework for burden-sharing – are struck, the relationship has actually been pretty fair and a model for U.S. alliance cost-sharing with other states. Other countries, like Germany, Italy, and Japan, spend far less on defense than South Korea.

There are two elements in Trump’s favor under-discussed in the South Korean debate. First, it is not widely understood in South Korea that the country’s defense costs would spike without the U.S. alliance. The U.S. presence is rather thin on the ground now. The number of facilities has shrunk over the years, as has the total number of warfighters. But behind that light footprint is the whole weight of U.S. military and intelligence community. South Korea benefits particularly from the complex, heavy platforms which the U.S. provides – or would in the case of a war – such as aircraft carriers, satellites, and a large airfleet – bombers, lift aircraft, and highly specialized vehicles like the U-2 or A-10. The U.S. also provides logistical support, maintenance for its various in-country assets, and C4ISR (Command, Control, Communications, Computers, Intelligence, Surveillance and Reconnaissance) – all areas where South Korea is under-resourced. The U.S. has also pledged extended nuclear deterrence to South Korea.

Seoul could replicate these various capabilities; South Korea is wealthy. But the country’s defense and intelligence budget would likely triple or more to do so. Giving five billion dollars to sate Trump’s desire to brag that he is making the allies pay up is humiliating and demoralizing, but it is still worth it for a world-class defense guarantee. South Korea will likely agree to a substantial increase.

Second, the South Korean left particularly tends to argue that South Korea need not pay more, because the U.S. is using South Korea to contain China. This is inaccurate. First, it is not even clear if U.S. policy is to contain China. To be sure, the climate in Washington on China is more hawkish than ever, but the China debate is not over. Also, the Trump administration is so erratic on China, it is hard to know what U.S. policy is. Second, South Korean governments have made it very clear over decades that they do want to participate in any U.S. containment of China or wider hegemonic projects in Asia. They have fought repeatedly to limit the U.S. military relationship with the South solely to deterring North Korea, demanding, for example, that U.S. troops in South Korea not be sent to fight in the war on terror, and keeping the South Korean navy out of the South China Sea.

There is no obvious formula for a fair sharing of the costs. The purpose of the SMA is to muddle through this issue with at least a minimum of comity. It is far easier to convince Seoul to pay if the discussion is low-key and framed as a debate. Trump, as is his wont, has cast down a very public gauntlet which looks to the public here like a shake-down.

One possible way to move beyond Trump’s ultimatum without an acrimonious breach is for greater Southern payments to accompany fewer U.S. restrictions on Southern military technology. For example, the South Korean Chosun Daily argues, that if Seoul contributes more money, why not release it from U.S. restrictions on solid fuel rocketry, missile ranges, and nuclear fuel?

This an excellent idea, a swap that will make a major Southern payment hike be more an exchange than Trumpian extortion. And many of these restrictions serve little military or political purpose anyway. U.S. constraints on South Korean nuclear and missile technology were originally intended to signal restraint to North Korea to encourage its better behavior. These have pretty clearly not worked, and they should be South Korea’s sovereign decision in any case. More generally speaking, there is no obvious reason either why the U.S. should oppose South Korean missilization and/or nuclearization if the U.S. is to demand so much money.

South Korea may or may not build nuclear-powered submarines, long-range missiles, or nuclear weapons. In fact, it will probably not do so, especially under this left-wing government. But these should be its own national choices. And if Trump is to demand a king’s ransom, then he should at least give something tangible in return.

Robert E. Kelly is a professor of international relations in the Department of Political Science and Diplomacy at Pusan National University. More of his work may be found at his website, AsianSecurityBlog.wordpress.com. You can follow him on Twitter: @Robert_e_Kelly.