The U.S. Just Made Travelling to North Korea Easier—For Some 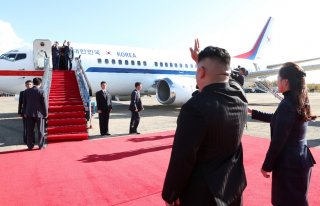 The State Department has issued a small rule change that will affect aid workers who go to the Democratic People’s Republic of Korea (DPRK).

According to NK News, the State Department will now “allow humanitarian workers to visit North Korea multiple times on a single authorization, rather than just once.”

Under normal circumstances, holders of American passports are not allowed to travel to North Korea, unless they receive a “special validation” passport. The new rule went into effect September 3 and will remain so for four years, continuing through September 30.

Among those eligible for such validations are journalists, humanitarian workers, one who is a “representative of the International Committee of the Red Cross or the American Red Cross traveling on an officially-sponsored Red Cross mission to the DPRK,” or otherwise representing the national interest.

Traveling to North Korea without the validation could lead to the revocation of a person’s passport, the State Department warned. Those applying must also make clear that this is the type of validation they are seeking.

“It is something that we’ve been asking for if they’re not going to rescind the travel restrictions altogether,” Jasper said. “So, a multiple-entry passport is a positive step … [and] might be helpful in the future, but right now, it doesn’t really help us get over that initial hurdle of getting back into the country when the borders are reopened.”

In addition to the State Department restrictions, the Centers for Disease Control and Prevention (CDC) has also been clear about not wanting Americans to travel to North Korea, despite the regime’s repeated claims to have zero cases of the virus.

“Avoid travel to North Korea. If you must travel to North Korea, make sure you are fully vaccinated before travel,” the CDC’s current advisory says. In addition to COVID-19 vaccinations, travelers to North Korea are advised to be inoculated against Hepatitis A and B, Japanese Encephalitis, malaria, and rabies, in addition to “routine vaccines” to chickenpox, polio, shingles, Diphtheria-Tetanus-Pertussis and Measles-Mumps-Rubella (MMR).