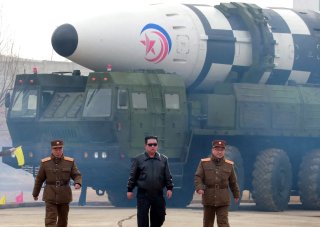 This week North Korea put an end to its over four-year moratorium on new intercontinental ballistic missile (ICBM) tests by launching the Hwasong-17 missile into the sea near Japan.

"The new strategic weapon of the DPRK would make the whole world clearly aware of the power of our strategic armed forces once again," North Korean leader Kim Jong-un said through the Korean Central News Agency, as cited by the Yonhap News Agency.

The launch was swiftly condemned by authorities in the United States, South Korea, and Japan.

The next day, North Korea state TV launched a propaganda video showing Kim and other North Korean officials "overseeing the launch" of the ICBM, per The Guardian.

Compared by various outlets to Top Gun, the video features dramatic music, and Kim is seen walking in front of the missile, wearing a leather jacket, with uniformed military officials on either side of him.

At one point Kim is shown pointing before the missile is shown in full. Kim and the officials are later shown looking at their watches, implicitly to check on the timing of the launch. At one point, Kim removes his sunglasses and gives the thumbs-up sign. Then, a red light is shown flashing before a countdown, the press of a button, and the launch of the missile itself. NK News published an eleven-minute version of the video, which shows Kim and the uniformed military officers celebrating.

According to Reuters, during Kim’s decade-long tenure, "North Korea has sought to give its state media a makeover with digital effects, seeking more modern ways to tell its stories."

There was another bizarre story this week about the connection between Kim and showbiz. In an interview with Tucker Carlson on Fox News this week, musician Kid Rock revealed that former President Donald Trump once sought his advice about how to deal with the North Korean leader. It happened when Kid Rock visited the White House in 2017, around the time of the Trump administration’s diplomatic opening to North Korea.

Trump, while looking at maps, asked the entertainer "What do you think we should do about North Korea?” Kid Rock said in the interview. "I’m like, ‘What? I don’t think I’m qualified to answer this.’"