Want to End the Korean War? Talk to a Veteran Who Fought In It. 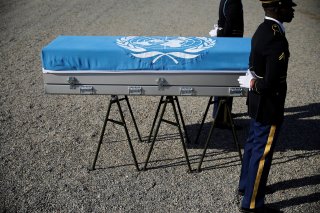 Although current conditions suggest that an end to the Korean War before 2025 is an unlikely outcome, the seventieth anniversary of the war’s start provides us with an opportunity to reflect on the legacy of the conflict and the lessons it offers. The perspective offered by studying the war’s beginning, expansion, and aftermath provides valuable lessons that help illuminate an informed approach to deterring future conflict and achieving a stable and lasting peace.

The United States was caught unprepared twice during the Korean War: first during the North Korean invasion, and then again when Chinese forces poured over the Yalu River and entered the conflict. The CIA did issue a prescient warning in June 1949 saying that “Withdrawal of US forces from Korea in spring of 1949 would probably in time be followed by an invasion [...] by the North Korean People's Army possibly assisted by small battle-trained units from Communist Manchuria.” However, most analysts and policymakers in Washington were focused on other regions as potential flashpoints for satellite conflicts with the Soviet Union, including Iran, Greece, Turkey, and Berlin. Just before North Korea invaded in June 1950, the CIA ranked Korea fifth in terms of “explosiveness.”

Although sufficient information was collected to suggest both North Korea’s invasion and China’s subsequent entrance into the war, the quality of the analysis was diluted by presumptions about the adversary. Policymakers over-attributed Moscow’s centrality to the decisionmaking of all Socialist countries and paid not enough consideration to local actors and incentives. Analysts applied mirror imaging, interpreting the interests of the adversary through the prism of their own perspective. In the case of China, recovering from civil war and woefully outmatched by American military muscle, the costs expected of conflict seemed to outweigh potential gains, but a glimpse into Chinese strategic history illustrates that Chinese empires have for centuries spent blood and treasure to intervene on the Korean Peninsula.

The aftermath of the war set conditions for the establishment of an alliance that has credibly deterred conflict for over sixty-five years. This isn’t to say that the U.S.-ROK Alliance hasn’t changed, grown, or adapted over the years. Indeed, the alliance has weathered numerous stressors and evolutions, including major force reductions in 1960, 1971, and 2004, provisional plans for withdrawal under the Carter administration, and substantial reconfigurations of the force presence.

Today, an overwhelming majority of Koreans and Americans continue to support the alliance. The strong foundation of this relationship has proven resilient enough to withstand past pressures and will continue to serve as a bedrock for the road ahead. It is the key to seeking positive improvements on the peninsula, with South Korea’s President Moon Jae-in suggesting that the alliance should remain after denuclearization, a peace treaty, and even unification. A strong alliance creates ideal conditions for lasting diplomatic progress. Gen. Robert B. Abrams, commander of the United Nations Command, Combined Forces Command, and United States Forces Korea, said the joint U.S.-ROK Alliance posture supports “negotiation by permitting our diplomats to speak from a position of unquestioned strength and capability.”

Listening to veterans is the best way to learn the lessons of the Korean War and to honor those who served. They remind us both what we lost and what we have gained through the conflict. Time is running out to gain the benefits of their experience and wisdom directly, but you will still be able to watch Marine veteran and Korean War Veterans area commander Sal Scarlato recount his journey into service and revelation about why the United States joined the fight as well as take advantage of the collection of oral histories from Korean War veterans curated and made available to the public by the Korean War Legacy Foundation.