The War After Kim Jong-un Dies 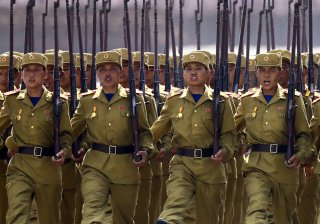 North Korea watchers are keeping a close eye on news reporting that Kim Jong-un may have died, or is in ‘grave danger’, possibly after a botched medical procedure, and speculation is increasing about succession arrangements. The greatest focus is on Kim’s sister, Kim Yo-jong, to be the logical heir apparent, hopefully in a smooth power transition. Yet this outcome isn’t assured.  Much would depend on how various factions around Kim Jong-un would respond to her rise, and whether forces seeking a window of opportunity to overthrow the Kim line of succession would see Kim Jong Un’s death as their moment to act.

In that event, a worst-case scenario is suggested by Van Jackson, who considers the possibility of a dangerous power struggle inside North Korea escalating into a military clash between the U.S. and China if North Korea were to become destabilized. He notes the prospect of internal unrest – even civil war – within North Korea, must raise the issue of the security of North Korea’s nuclear weapons. If civil order breaks down, U.S. forces in South Korea, and the South Korean military, might be forced to intervene north of the DMZ to secure these weapons. A U.S. move closer to the Yalu could then easily trigger a response from Beijing.

Alternatively, China could move south of the Yalu to stabilize internal unrest in order to prevent waves of North Korean refugees – potentially with COVID-19 – heading across into China. How might the U.S. and South Korea respond as PLA forces headed towards the 38th Parallel?

The key point here is that the situation on the Korean peninsula is not unfolding in a strategic vacuum. Potential events there – and any U.S. response to them – will be watched from Beijing closely, and seen in a broader context of intensifying U.S.-China strategic competition. Already China seems intent on exploiting U.S. vulnerabilities after COVID-19, and any unrest inside North would dramatically boost the risk of a wider conflict.

Beyond the peninsula, the PLA Navy is determinedly testing U.S. resolve, sinking a Vietnamese fishing vessel, and locking its fire-control radar on a Philippines Navy vessel in the South China Sea. U.S., Australian, and Chinese naval forces are operating close to each other around disputed areas and the potential for a clash could lead to a widening conflict very quickly. ASPI’s Peter Jennings has noted that China’s assertiveness is growing in the apparent face of U.S. reduced military readiness emerging out of the coronavirus pandemic. He highlights China’s increasing coercion against Taiwan and the prospect that Beijing would impose a military blockade as it senses the U.S. is turning inwards and might be unable to respond.

A rapidly destabilizing situation on the Korean Peninsula would add to these risks. Faced with instability in North Korea, and with the risk of naval conflict in the South China Sea, Beijing might calculate that now is the time to act decisively. Entering into their calculus would be the growing effectiveness of its anti-access and area denial (A2AD) capabilities that have recently forced the U.S. to end its continuous bomber presence on Guam for the first time in sixteen years.

The scenario suggested above is certainly a worst-case one, and is not necessarily inevitable. But the absence of a clear succession process when Kim Jong-un does die dramatically boosts the risks that such a development will generate consequences not confined within the hermit kingdom. Much like the assassination of Archduke Franz Ferdinand in Sarajevo in 1914, the death of Kim Jong-un might be the spark that lights a devastating conflagration that encompasses the world.

Malcolm Davis is a Senior Analyst at the Australian Strategic Policy Institute.